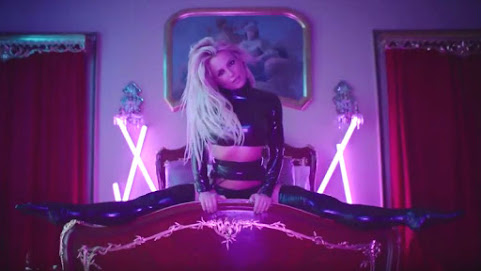 Quick glimpse at a classic American hottie still on top of her promo game:

HT: Britney Spears Does The Splits!!!

Closer to home, these news links start our day . . .

Arem Mohammed's white tuxedo flashed as bright as his smile while he sang the national anthem for the first time as a U.S. citizen Wednesday at a

The multimillion-dollar investment from a Saudi Arabian accelerator and capital firm is pushing WISE Power from the West Bottoms to global growth.

The Department of Health and Human Services sent a consultant to KCK to ask the Unified Government why it's taking so long to build fast-food restaurants in Argentine, which are partially...


Shades of Blue Soccer Show - The Playoffs Return to KC

This week's podcast will get you ready for Sunday as the MLS Playoffs return to Kansas City!


What are the odds? Chiefs have won 13 straight pre-game coin tosses

KANSAS CITY, Mo. -- Some think of 13 as being the most unlucky number. It turned out to be a stroke of good luck for the Kansas City Chiefs (8-1) and keeping their streak alive -- when it comes to winning game day coin tosses. The numbers are fairly staggering.

The snowstorm is expected to hit the Midwest all day Thursday and Thursday night.

RE: New Citizens From 30 Countries Are Sworn In At The Kansas City Library

In a Top Photo featured yesterday Kim Kardashian spread her legs and an Elephant walked out, today Britney Spears spreads hers and a Bed falls out!

When will we ever stop giving these whores the attention they crave?

Hello, hello? Is there anyone left alive? I've barricaded myself into my concrete and steel for the season's first snowpocalypsebomb. I was a lucky one, and bought 48 loaves of bread and 40 gallons of milk with stock left on the shelves. I went ahead and disconnected my breaker box from the grid and put it completely on generator. I setup a siphon from my foolish neighbors gas tank before I came down here. I don't even know if my message is getting out. I hope the Nat'l Guard is helping those who need it. I'll be good for a couple months before I attempt to stock up again.