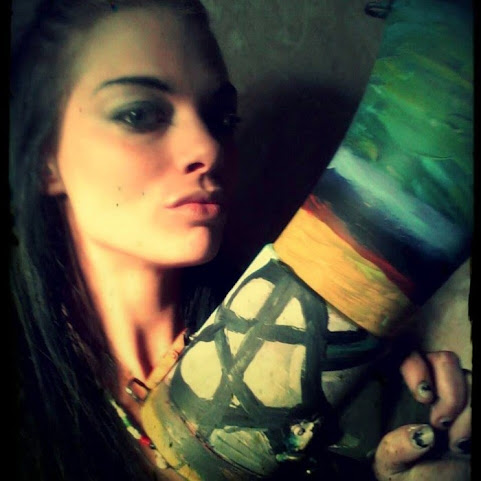 One of of the most celebrated and prolific activists in recent Kansas City memory is back in town for just a bit and ready to rage against the City Hall machine.

For those who don't remember, Toni Bones earned national media coverage for her work with CopBlock and in the early fight for marijuana law reform in Missouri.

And now she's pissed about how KCMO is treating the less fortunate.

Background:  Officials from the Health Dept. cracked down against a group feeding the homeless and destroyed the food they were attempting to share - After the food was confiscated they reportedly threw it in the garbage and poured bleach on it so that no one would dare touch it. Outcry erupted and explanations from both elected officials and authorities fell flat. Even conservative tax fighters weighed in against the heavy-handed municipal action:

Why Is the KC Health Department Stopping Neighbors from Feeding the Homeless?

Accordingly, as she passes through Kansas City with her family and leading a very productive life with a new hubby and baby in tow, she recently shared this message with her fans regarding the local homeless crisis:

Toni Bones: "What is wrong with these monsters??

"This weekend, I will be supporting this local group and helping to feed the homeless in Kansas City, MO.

"I will also train other volunteers on how to create objective records by recording law enforcement and other tips on staying safe since local police and health department officials insist on bullying them, dumping bleach on their food and dumping their soup on the ground.... ya know, for our safety."

"I knew I should've brought my god damned megaphone."

KANSAS CITY ACTIVISTS HAVE VOWED TO INTENSIFY THEIR EFFORTS TO FEED LOCAL HOMELESS AS THE WEATHER GROWS COLDER AND THREATS FROM CITY HALL HEIGHTEN!!!

There's certainly a need as KCMO confronts a rising population of homeless and politicos struggle to cope with new rules & regs to deal with the influx.

KCMO deserves all of the flak they get from this. Was also very encouraged to see people finally standing up against Mayor Sly James when he attempted to try and justify the actions of the health department that were totally out of line.

Just in time for the holidays. Kansas City hates the homeless.

Hoping that Free Hot Soup gets some coverage out of this and more people become aware of the problem.

The problem is too many bums in Downtown KC. I feel sorry for them but if we really want to turn around this city, we need to do something about this problem other than feed it.

Slie is trying his hardest to rid the entertainment district of the homeless as he does not want the blight in his utopia.

TKC, maybe you should inform your friend Toni that the Health Department was doing their job and they performed the task in a professional and responsible manner. what they were doing was actually to protect anyone who might have been subject to food borne illness. I know it's very popular to portray City Hall as the bad guy here but in reality the registration for this group was free and they simply needed to abide by City Rules in order to operate. Any volunteerism is welcomed but if we are going to keep our momentum going, we must obey the rules when we try to help so that we don't hurt.

If anyone is surprised that conservatives are opposed to government interference in private charities serving those in need have no real understanding of conservatives. Out most fundamental ideals is that activities like helping the homeless BELONG to private charities and religious organizations using money that wasn't extracted from the taxpayer at the end of a government tax agent's gun.

The only role government should have in this is to stay out of their way and let these groups feed and assist whoever they want to.

I can't believe I actually agree with Go4KC. Spot on sir.

Just imagine if all the bums got diarrhea at the same time. The city would be uninhabitable.

Bones is full of shit.

You should give them handjobs too. Show some real compassion.

"Rules are there to protect the public's health, and all groups must follow them, no exceptions"


LOL from the mouth of Slie James no less

Left town and got another sucker man, huh? I take it a "very productive life" means "staying out of jail."

Ahhh the life of the American woman.

My only question is why now? Me thinks sLIE wants to control where they do these kinds of things like, not in my downtown.

Hate to say it but Go4KC got me thinking just a bit.

Why doesn't the group just follow the rules? If the registration is free then they shouldn't really be complaining. I don't always agree with the city but I'm not the first one to blame them for everything.

I think they're the ones who have the messed up priorities.

Handjobs for hobos? I think you've come up with a great even that will inspire me to dress down for the day. Where does the line start?


O.K. let me get this straight. The democrats in city all stand for no kid goes hungry (I assume that means anyone.) and they throw out food for the homeless. There's no words to describe how awful that is! And you people point a finger at us???

Has the free bus ticket to Florida program started this year yet ?

TONI BONEY IS A REACTIONARY

She went to Ferguson MO...AFTER the riots.

She protests for marijuana law reform...AFTER being a pothead for years and trying to become Miss High Times.

She records police...AFTER there's been some incident.

She protests the Health Dept...AFTER they bleached free food offerings.

She ranted against Sugar Creek/Independence Police...AFTER she got arrested multiple times.

Some say she likes to come from behind!

Noting wrong with that. only hipsters come first and too quickly!

Agree. And I’d like to see that fat turd go without a few meals and he might feel differently. Are the dumpsters they eat out of blessed by Gopher and the Health Dept?

Sorry. Not new. Gopher started that service at city hall long ago.

They can't get a permit because a permit requires a commercial kitchen, defeating the whole purpose of the group.

Does the health department come into your or your neighbors Homes to regulate you for your food borne illnesses when having a picnic or tailgating? No, well same this is the same thing, these are just individuals sharing a meal from once house or family to another, one just doesnt happen to have a home. No different. If the homeless were worried about food borne illnesses then they wouldn't choose to eat it with us as we break bread with them as friends. If I need a permit for this then every person who eats needs one.

Does the health department come into your or your neighbors Homes to regulate you for your food borne illnesses when having a picnic or tailgating? No, well this is the same thing, these are just individuals sharing a meal from once house or family to another, one just doesnt happen to have a home. No different. If the homeless were worried about food borne illnesses then they wouldn't choose to eat it with us as we break bread with them as friends. If I need a permit for this then every person who eats needs one.

They never checked the temperature of the food being served, they also left the bleach covered food laying on the ground, it really sounds as though they were concerned with the safety and health of these hungry people

Toni is a half attled bi-polar asshole of the highest order. Bitch had been living on the streets with her kids. Does not now nor has she ever had a job. What’s ironic is that she rails against the system that props her up with benefits that the rest of us work our asses off to pay for. I wish someone would shove that fucking bullhorn of hers down her fucking throat.

@ 5:53 Kickbacks, mi amigo. Democrats have always supported the poor as long as they can skim a cut off the top for themselves.

Well, I guess it is kind of cute that you have been following me for years.