Amid Worsening Drought: Is It Time To Reconsider The Great Kansas Aqueduct?!?! 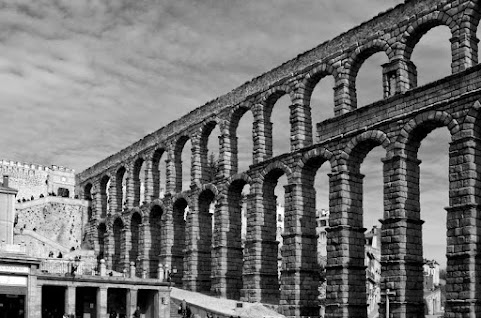 Like all blogs, we love amateur urban planning and ideas that shake up the status quo.

Btw, that's an old Roman aqueduct in the lead photo, it's still standing so it also serves to provide proof of concept.

Check this worthwhile missive on a retro idea and maybe a few more options for saving Kansas from a return to dust bowl days:

The Great Kansas Aqueduct: Solution or Folly from a Bygone Era?

Thirty-six years after this project was first conceived in full, though, shovels and backhoes remain in their sheds as the Ogallala aquifer drops nearly two feet per year in some counties due to groundwater over pumping. If groundwater withdrawals continue at current rates, most of southwest Kansas will exhaust its water reserves within 25 to 50 years. One tends to think that in times of yesteryear, individuals would have begun construction on this project in February of 1982, begging for forgiveness later. But the time of unbridled infrastructure construction has passed and Kansas continues to stress its water resources.

Does the fact that the Great Kansas Aqueduct remains in the ideation stage represent a failure of imaginative thinking in the world of American infrastructure or the success of forward-thinking individuals that realize this infrastructure project can never be fully repaid by its customers? Maybe both, or maybe it is a third option. The fact that the Great Kansas Aqueduct remains a viable solution to many seems to simply be a symptom of our continuing to rely upon old ways of thinking for new problems. When people first began populating Western Kansas, they used surface water and natural rainfall to water their crops. After draining those surface waters, the next generation began to dramatically pump the Ogallala. Today, as the Ogallala declines dramatically, Kansas is simply looking for a new source of water supply that it can systematically deplete over the next 20 years. That can’t be the solution; after all, the United States has long been known as a country willing to take gigantic risks in order to build innovative infrastructure for future generations – but those risks cannot simply repeat the unsustainable mistakes of the past.

Great idea. Will President Trump give us a few billion dollars for it? Not after that midterm vote methinks.

Better idea - use Eminent Domain to depopulate Western Kansas and let it revert to grasslands.

Even better idea - move the Missouri State Border 27 miles west and the Colorado Border 390 miles east, and the problem Kansas is having goes away immediately.

It has been known for decades that the aquifer was being drained faster than replenishment could handle. I don't think wasteful usage should be "rewarded."

Problem with an open aquifer is the water losses due to evaporation would make the problem nearly a zero sum gain. Pumping in pipelines would solve that issue, but could not generate enough to meet consumption rates. Not to mention, it would be incredibly expensive. There are ZERO good solutions for this other than going back to dry-farming which would reduce yields by half or more. Take away ethanol mandates and subsidies and quit growing water-intensive crops (corn) and take the hit on wheat yield, which will grow in dry-cycles.