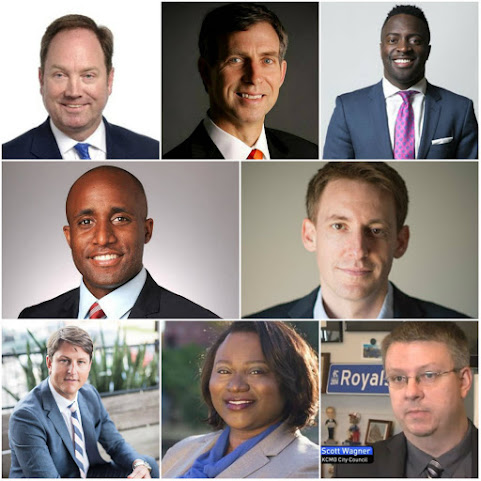 A political preview for tonight . . .

Check more deets in this upcoming rucks that hopes to garner greater public participation than most local votes . . . Tell us who you think will win the comments . . . Checkit:

Nine individuals have declared their candidacy to be Kansas City’s next Mayor. Five currently serve as City Council members, but some are relative newcomers to the KC political scene.

Learn what the candidates have in common and what differentiates them from each other. The conversation begins at 6 p.m., Wed., Sept. 12 in the Eastgate School auditorium, 4700 NE Parvin Road, Kansas City, MO.

All nine candidates have been invited and ALL have committed to participate. In order of acceptance they are:

The forum is hosted by Forward Kansas City, nonpartisan advocates for the Northland, and is free and open to the public. Former City Councilman Ed Ford is moderating the forum. Ford chairs the Public Policy Committee for Forward KC and serves as one of the organization’s vice presidents.
###########

Glad to see Forward KC leading the way on this one. Frankly, from the coverage I've seen there are way too many people willing to give this one away already. It would be nice to hear what the candidates actually have to say for themselves.

Early predication that most of you should know, Scott Wagner wins this one because he's friends with all of the people at Forward. In other words, it seems rigged.

Please don't overestimate the influence of Wagner, right now he's on record as having less cash than Councilmember Alissia Canady. He should probably drop out.

Will the moderators ask the candidates for their views on unsolicited bulk email?

^^^^^^^^^^ Kander wins and he will destroy your spam @6:55. Also if you keep spamming your "diana is lovely" bullshit I will fart in your general direction. Try to be more interesting and the ladies will line up to polish your knob!

That'll be a clusterfuck.

Wagner wont even carry the Northland just like Deb Hermann.

Scott is doing almost as poorly a's Reed when it comes to securing a new job. He doesn't have much of a future outside of politics.

Will canady apologize to the police?

She wants to turn killa shitty into Baltimore and that’s bad, dry bad

Interesting that they are coming to the Northland where nobody important lives, it's all white privileged people who hate everything about South of the River, and what else....... Oh yeah, the place where we pay our taxes and get ZIP in return from our leaders.

Canady should bring her car registration to prove its current. Fat stupid bitch.

how optimistic can one be after the disappointments of recent elections?

I'm voting for the giant douche and not the shit sandwhich said...

All I know is Kansas City’s 3rd district is a freaking death trap.

Sad, but true, @5:37am.
It's also where hundreds of millions of taxpayers' dollars go to die.
They disappear into thin air and are never heard from again.
It never changes.

6:01 I wonder what explaining what the third district is like to people who have never been there. Say you were at some random college class in Colorado and you were given 20 minutes to explain the third district and what you would see if you ever came to it.


I mean I personally would just have a slide show with two pictures. One of a body bag and the other a glass smoking pipe.

Not surprising at all that they're holding this debate north of the River, all the African American Candidates know that's the only place within the City Limits that's safe after dark.

Count how many times Canady uses the word "like".