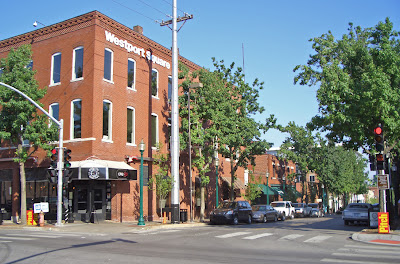 Proponents of the Westport Street "vacation" touted public safety and scared locals with the prospect of gunfire targeting local crowds.

Meanwhile, the local urban planning crew objected to the street privatization effort and advocated against residents giving up their rights to navigate public streets.

That incident happened around 2:45 a.m. An officer working off-duty near Westport Road and Pennsylvania observed a man fire a pistol into a group of people.

Two people were shot. Their injuries are believed to be non-life threatening.

The off-duty officer chased the suspect on foot, and the man was taken into custody.

To be fair, here's the statement from Westport which claims that gun screening isn't up and running yet and tacitly admits that all of their other overwhelming security measures have been ineffective:

"Westport wishes the two people injured last night a speedy recovery. We are saddened that gun violence continues throughout our nation as well as here at home. We remain eager to start screening for weapons in the core pedestrian areas to enhance existing safety and security measures once all of the city requirements are met. We are hopeful that the outstanding requirements can be met later this summer and screening for weapons can finally begin."

And so, what we're seeing now is Summer violence ramping up while local schemes that promised to curb local violence remain unproven.