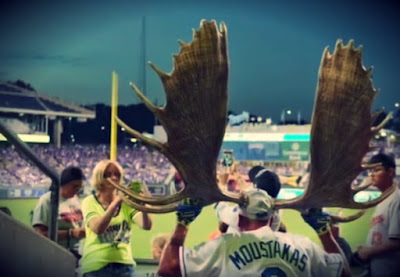 Once and for all, let's realize that Mike Moustakas was a slightly better than average ball player and nothing more . . . Now he's on the trading block and the hype the surrounded his Kansas City playing days new sadly come to a conclusion.

The dude allowed to enter the K with moose antlers probably marked the pinnacle of local fanboy hysteria with the B-list at best local baller.

The auction for the third baseman won't merit the team much. His greatest asset is local branding which won't play well with the Cardinals or anywhere other team with far more cultural attractions than sitting in a crowded parking lot eating and drinking for hours & hours on end.

Sadly, after the days of superior performance are long gone, the Kansas City Royals are mired in culture war controversy and muddling through issues like abortion, sex offender recruits and advocacy against pr0n. Meanwhile, lackluster play leaves the home team at the bottom of their division. There's a lesson somewhere in there but we'll leave it hyper partisan hacks to interpret.

Now, as Summer sweat disguises bitter tears, fanboys have nothing more than memories of Mike Moustakas' glory days to console them given that bigger and better cities are focused on building consistently competitive franchises whilst hype has always clouded the minds of Kansas City residents making for easy sales and then, ultimately, bitter disappointment.

And all of this inspires tonight's playlist for this Summer night.