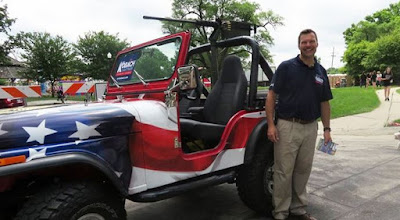 As usual, politics spoiled a good time for families and a small town.

This isn't a debate about gun rights, because that wasn't a gun.

Even worse, the proponent of strict policies for voters is doubling down on his rhetoric whilst MSM call the gun a "replica" and FAIL to accurately refer to it as a toy.

I've seen the comments and what's sad is that many voters are so desperate for a real leader that they would take gladly support the illusion strength that SecState Kobach offers in the absence of anything else that satisfies their disappointment with Kansas politics. Despite stock market gains, for most working-class Sunflower State residents, the economy is stagnant whilst politicos from all sides continue to sell dreams and parade around promoting a CONTRIVED IMAGE THAT IS NOT REAL.

Sadly, if Kansas Guv Colyer doesn't exploit this faux pas with guns blazing (in a rhetorical sense) . . . Then he's even weaker than the fake tough guy politico.

WaPO: ‘I will not back down’: Kansas Republican defends displaying replica machine gun in parade

Don't have too much faith in the voters TKC. They love their toys. That's why video games are so popular. Politics is the real version over it but you get to play for real, with other people's lives.

A dubious conclusion. Most of us think anything that triggers liberals is a barrel of fun.

A dumb move by Kobach that targeted families. Coyler deserves to win because of this. KK obviously is not ready for prime time.

Dumbass probably thought it was real, sure as hell never spent a day in the Military.

Kansas are such morons. I pray to God that Kobach wins. The destruction of Kansas will be complete! Kansas absolutely deserve him as you Governor. Please vote him in!

If this was a 2nd Amendment tantrum, when did the State allow everyday citizens to pack 50-cal full auto machine guns? Idiot.

Monarch won a silver star in the Gulf War. He has a right to carry a gun.

Was there a rainbow float too ? That would balance out the Jeep, all factions pleased.

yes, I too am rooting for Trump Lite, Kobach. The implosion of kansas will be swift and beautiful. What do you get when you combine Joe Arpiao, Trump, Alex Jones and Ayn Rand into one person: a circus freakshow we can watch and laugh about from afar.

Please do it Kansas.

Where is Tracy and one of her hated melt down rants at? This is her home so she claims. I would think she'd be on full out freak out over this. Just goes to show you if it has to do with LGBT or illegals nothing is shameful or wrong about it. But if it even faintly hints of a gun of any sort it's full out hate against the person or people for the 2nd amendment. No wonder this country is so messed up.

^^^You would say so, cause you need either God or a gun to get a girl.

^^^^^No matter what you have you'll never get one

^^Dude stop. You got knocked the fuck out!! Pick yourself up and walk off. Your retort shows how bad that got to you. Your reply was worthless and weak. Simper off now.

I think this is being blown out of proportion. Kobach did it as his nod to the 2nd amendment, not to advocate violence. I grew up around gun lovers and I don’t know any of them that weren’t sickened by the various school shootings. It would be a pretty soulless person to be ambivalent about kids getting killed. And without any sarcasm, I can say that half the pics of me as little kid were in my cowboy duds, complete with holster and toy revolver. Yet I didn’t grow up to be a cowboy or a killer (I don’t even hunt). I think, like most questionable items, it’s up to parents to educate children about guns, gun safety, etc. just like they teach them to drive, etc. The mere sight of a gun should not cause such an uproar; I’m guessing there were police officers in and around the parade? Parents could explain that the military has guns just like the police, to keep us safe. kids are going to see them on police officers, etc. Some of the reactions would make you think Kobach displayed a gun on a daycare float.

2:52 Joy Reid
'I’ve also spoken openly about my evolution on many issues and know that I’m a better person today than I was over a decade ago.'

We have a lot of issues to discuss in Kansas. Serious stuff like taxes, school funding, voter registration rules, highway maintenance, economic development, and crime prevention. But let's obsess about a toy gun on a parade float in Shawnee.

^Obsess and virtue signal is what snowflakey libturds do best.

Kobach has the right to make a political point. I'm actually encourage he's standing behind it instead of retreating.

I'm votin' fer the guy with the gun mounted on his American flag Jeep.. doo..doo.
MERICA