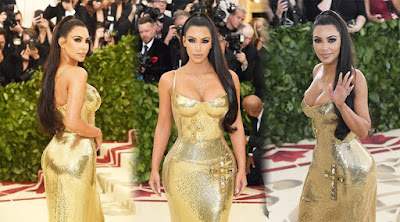 Around the world we notice that an iconic hottie is slowly morphing into an activist . . .

Allure: Kim Kardashian Showed Up to the 2018 Met Gala Dressed as a Bottle of KKW Body Perfume

Closer to home, here are a few local news items today that are also worth a peek:

KANSAS CITY, Mo. - Two Kansas City hairdressers are dying hair watercolors with a unique apparatus - a water gun. The Splash Kaleidoscope technique, otherwise known as water gun hair color, was coined by Kat Collett and Andrew Collett. The Colletts see each time someone sits down in their chair as an opportunity to impact a life.

Personal dashcam popularity has been growing - many people now have systems in their cars.

A preliminary investigation has determined that careless smoking was the cause of a fire that destroyed North Kansas City business block, the ATF says. Investigators say they were able to pinpoint the cause so quickly because of witness statements and videos. A smoking porch is located on the back of the south side of the building.

Help Get Justice In Grandview

More reward money is being offered in a 2016 unsolved homicide in Grandview. There is a reward total of $3,500 for information that leads to an arrest or filing of charges in the killing of Donald "Donny" Herron Jr. Three people broke into Herron's home in the 6000 block of 153rd Street on June 6, 2016.

St. Louis Circuit Judge Rex Burlison has rejected a media request to record audio during the felony trial of Gov. Eric Greitens. Burlison ruled Wednesday that still photography would be allowed for the first 10 minutes of the first day of trial, which is scheduled for Monday.

Tony show some class and stop highlighting any Kardashian trash