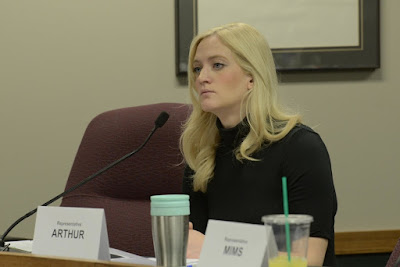 Here's an important note from one of our blog community denizens on the prospect of political change in the Northland . . .

"It's official. Tonight I received the Democratic nomination for State Senate in District 17."

Democrats across the country and Missouri have been flipping red seats to blue in special elections and this race will be no different.

"I'm running a campaign focused on creating jobs, providing quality education and protecting our children's future, and cleaning up the culture of corruption in Jefferson City."

This will no doubt draw national attention. Democrats run another young blonde pixie against another crusty middle-aged white male, Kevin Corlew. Hopefully it works out better this time.
##########

She actually is building a really great record of working for her constituents. Would do more for the Northland than Silvey ever accomplished.

Hopefully but probably not.

Silvey actually screwed Republicans helped by none other than Greitens.

If the district flips we have our governor and his scandal to thank.


Hottie YUK I don't think so, pretty ghostly. More like a frosted flake.

Bet she's not a natural blonde.

Where are all these flipped seats for progs? Gerrymandered areas?

She has a rode hard put away wet look about her.

What has she actually accomplished? Name one thing she has done in Jeff City?

@10:03AM we are also going to need your accomplishments as well. What have you ever done? Commenting on blogs don't count. Please include a credit check, background check and proof of employment. We all can use a good laugh. Odds are you're broke, in debt, and don't make shit. In other words typical TKC poster. Now before you ask, No you may not see mine. You are on a need to know basis and don't need to know.

How can you be the senator for one district and run for another? Why would you?

^^I am. You on the other hand, are not. So please shut up. You have nothing to say.

10:46 same as 12:41, nobody wants to hear about your background of BathHouse exploits, nor your claim of accomplishments at buttboi goop gobbling and poopchute munching. Odds are the only thing you own is hanging limp while you're on your knees doing those two above named acts on buttboiz in the BathHouse stalls.

"I'm running a campaign focused on creating jobs, providing quality education and protecting our children's future, and cleaning up the culture of corruption in Jefferson City."

Nice gal but does anything Bill Skaggs tells her to do. If you want Bill Skaggs back in office, vote for Arthur. Corlew is a good guy, works hard, and is a great representative who will make a solid state senator.