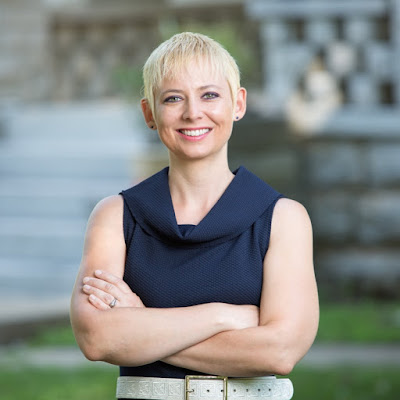 Whilst it might not be politically correct, we use the term "pixie" not only because The Pixies are still one of the best bands on the planet after all these years but also as one of affection for this feisty political contender and to highlight the difference betwixt her youthful, energetic campaign and the crusty old-school dude opposition that kinda represents some of the most backward politics Missouri has to offer.

As reported by Michael Mahoney of KMBC, an attack ad airing on local stations and paid for by Missouri Alliance for Freedom Grace River PAC is not accurate.

"Missourians deserve better than anonymously funded commercials filled with false accusations. Our campaign is calling on Mike Cierpiot to denounce this ad and its slanderous content.

Republican mega-donors want to distract voters from the real issues facing our state. What really matters, and what I will be focused on every day in the Senate, is whether our government is working for regular families.

Can our seniors afford their prescriptions? Do our kids have great public schools? Can hardworking families make ends meet? These are the issues that this campaign should be focused on."
#######

Have to give her credit, she's a lot more tenacious than most of her Democratic Party colleagues.

What are her views on unsolicited bulk email?

I like the fact that she's not afraid to call out her opponents.

I'll just go ahead and say it:

Ooh a progressive pixie! How unbelievably stupid and sexist.

What a pig you are Boteklo. Just an ugly hateful pig.

Your dad was my friend and a wonderful cuck said...

^^^ Take the branding support where you can get it snowflake. Her odds aren't good and the only way she wins is on the basis of her cuteness. Sorry to remind you of the real world.

Of course, she doesn't actually operate in the "real world".
Shields is yet another "personality" who is a product of social media and has somehow decided that she's a candidate based on the number of likes or Twitter hits she gets.
Sort of like the guy who takes credit for starting Black Lives Matter and decided that his "fame" made him a likely candidate for mayor of Baltimore.
He got ONE PERCENT of the vote.
She has no chance of winning in that district.
Back to the "Invincible" barricades!

I’m curious whether she shaves her pussy. That’s about all.

There’s just one problem. She looks like a Q-tip.

Her husband signed the petition to get Jacob Turk on the ballot. Either he’s a dishonest loser, or he thinks his wife is not up to the job.

The Democrats are eating themselves:

So you folks wanted to know what happened to Toni Bones?

I don’t get all the hype. She loses by 5-10 percentage points. BTW the only women who looked good in the pixie look was Paris Hilton and Pink.

Name is Hillary, and you're running in Red State MO in 2017.

You were a co-founder of Indivisible KC, the Trump-haters.

You have very short hair which some interpret as "feminist activist" uniform.

Your campaign started playing games early on when they got Turk to enter the race, hoping to draw votes away from the Republican.

What goes around, comes around.

Pixie should have Claire McCaskill do a campaign ad for her - that's sure to help!

I bet she was Peter Pan for Hallowe'en.:)

Does she put out?

SHES A PROGRESSIVE CRIMINAL LIKE THE OBAMA GANG AND HILLARY

Watch her eyes as she gives her speech in her TV commercials. You can see a change in them like she doesn't believe what she is saying. She's a three dollar bill.

Establishment GOP cronies are spending big bucks for TV ads with all the boogeyman words to scare the Republikkklan snowflakes.

I guess you can fool some of the people all of the time.