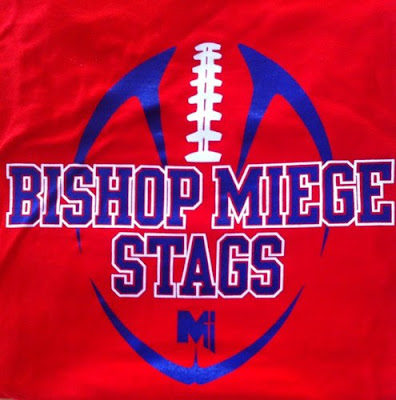 We finish our Kansas City evening on the topic of football once again and offer tribute to local Catholic victory . . .

Nope, this isn't a bit of pathetic Al Bundy reminiscing about high school football because the glory days of TKC weren't that glorious. TKC makes no connection to his high school alma matter because he played on a 90s era Miege team that was one of the absolute worst this institution has ever seen.

Instead, we note this win just as a quick compliment to the concept of hard work, competition and victory that still exists among the NEXTGEN even as adults attempt to change the rules and turn achievement into a disadvantage.

Yes, even in red state Conservative Kansas . . . Frustrated rural schools have attacked the KC metro institution and rage against alleged recruiting tactics which may or may not offer the edge against po'dunk towns with a small talent pool despite equal student population numbers. Some say the adult footballer complaint is akin to Hillary Clinton's last remaining supporters blathering about the popular vote despite well defined American election rules.

Either way, it's a mistake to get too hung up on high school football and this post is already going too long . . .

Miege is an excellent institution which provides one of the best educations in the Midwest and it's a place where I learned that life was unfair - Which is something that most Americans seem unwilling or unable to comprehend in an era where social media attempts to make every mobile phone user the center of the Universe.

And so . . . By hook or crook, just a quick tribute to continued Miege success with this playlist of favorite old school songs from all-Black female superstars who also dominated their era that will power our morning update as we continue to move forward.

Don't feel too embarrassed T. Witchita eagle and the TV stations covered this one as well. And without the Janet Jackson, Mariah, SWV, Jade and Sophie B. tunes.

"Stags" really? That nickname is not going to hold up over time. What do they call the female teams? Stagettes? Disgusting.

Those 4A bastards run the shallow cross.

I think that’s it, faggette.

If only KU recruited as well as Miege

America's religion gives its players a concussion. There's something ironic about that.

Not hard to win when you can recruit. Ever see Miege play? I see them every year. How many black Catholics do you know? I don't know any either, yet there they are on Meige. Remember Shane Ray of MU and now the Denver Broncos? Went to Miege yet grew up poor in the hood raised by a single mom. I'm sure they're Catholics and she could afford private Catholic school. Nope, nothing nefarious here, nothing at all.

If I remember correctly the name Stags had something to do with formally being attached to St Thomas Aquinus. Somehow they got Stag from that. But I only attended for 3 semesters after being kicked out of Rockhurst in December of my junior year.

Stags is an acronym for st. Agnes grade school

9:27 is dead on the money, it is all about money and an huge investigation needs to be done to expose it.

To be fair they should only play other private schools that can and do recruiting. Cheaters in estimation .

STAGS PUT IT DEEP IN THE END ZONE!!!

Let's discuss the elephant in the room....BLACK ATHLETES is the operative word! Faith-based education is no just privy to Catholics!

the glory days of TKC weren't that glorious

Neither are the current ones.

5:55 FTW. Glory days. Do you mean getting suied and forced to retract ? This blog is used toilet paper.

^^^ so why are you two geniuses here?

Is that the dicknose Wright lad chiming in at 6:28?

It's Sunday evening, so I'd imagine there are some nice musky jocks for you to be sniffing.

Oh that's right. 20 years have passed...and I never listened to much of what I was told when I was in high school...that might have been why Rockhurst got rid of me. Well that or my raging a.d.d. causing me to spend all of class pretending to take notes but actually filling notebooks with black flag and minor threat lyrics.

It's pretty common knowledge that most of the Catholic high schools offer tuition assistance to those who need it. I've talked to a guy at Sprint who is like a senior analyst type (his wife as well at another company) and his kids go to Aquinas and he does not pay the full rate of attendance.