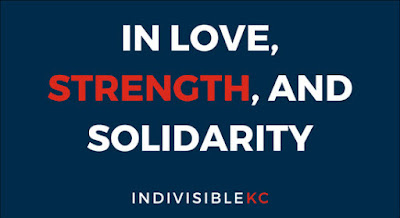 Special thanks to our blog community for making one of the very few documented connections in the ongoing investigation of the homicide of a Brookside lawyer.

Strangely, some of the comment troll d-bags thought me we made an "attack" on the widow during a dark time - Which only proves that politics always trumps common sense. Of course we offer our deepest sympathies and as TKC mostly serves to provide greater context and information. As always, partisan snowflakes on both sides of the aisle always seem exceptionally defensive.

In their FOLLOW-UP AND CONFIRMATION OF TKC FIRST NEWS, MSM claims this group is an anti-violence organization but their work has mostly been political in defense of Obamacare.

Here's the heartfelt note from the group after our KICK-ASS TKC BLOG COMMUNITY made the connection that was previously overlooked despite growing debate surrounding this murder:

"Reports indicate this heinous crime may have been committed by a man who had a history of gun violence, and who had no business freely carrying a firearm. Tom’s was only the most recent in an unfathomable number of preventable deaths. He was one of 159 people murdered in the Kansas City metro so far this year, along with an unknown number of deaths by gun suicide. Each death is tragic; each victim loved, valued and mourned.

"There are always those who argue that loss should not be politicized. Many IKC members live by the mantra that the personal IS political. This is most acute in situations like Tom’s death, which may be directly attributed to the failure of our politicians to enact and enforce common-sense regulations, with which even most gun owners agree. It is time to ask our representatives in state and federal government how they justify their failure to act."

IS THIS POLITICAL MESSAGE IN THE AFTERMATH OF A HORRIFIC MURDER APPROPRIATE OR A CYNICAL ELECTION SEASON PLOY???

There's never a break from political theater. The show goes on and on.

Their points about REASONABLE reforms are not controversial. And the healthcare system would be face less expensive costs if there weren't so many gunshot victims out there.

This story was never NOT about politics.

Police say the guy is not a suspect.

This group takes an interesting strategy. I don't know if it will convince a lot of people or earn them more followers, but it should definitely rally their supporters.

The police also said the walking trails were safe and we didn't have a serial killer. Between their incompetence and their lies, anything the police say is unreliable

People behind the gun are the problem. Ban people

The group "Indivisable" would be better-named "invisible".
Just another of the endless line of "activists" groups who think that online blather is the same as actually getting involved in issues, learning enough about them to be able to make serious recommendations, and working with elected officials and others to actually make some positive changes.
Marches.
Vigils.
Protests.
Demands.
Pointless publicity.
They all have a half-life of about 12 hours and then just disappear, overtaken by yet the next "outrage".
This is just more pointless background noise.
What's next?

“From my cold dead fingers”

1- drugs
2- alcohol
3- cars
More deaths are attributed to these three than guns.

Ban guns and these will be banned next.

Since the overwhelming majority of shootings occur in the hood, I suggest these folks ban together and march into the darkness and confiscate guns from persons not eligible to possess a firearm. Let us know how that works out.

The ONLY people who will obey gun laws and turn in their guns if they are outlawed, is white people.

Gun laws are all about control and taking control away from people who obey the law. Blacks, who are responsible for 75% of violent crime, murder, rape, assault (Remember only about 50% of homicides are solved.) and theft will NEVAR TURN IN THEIR GUNS YOU DUMB FUCKS.

Ban black people, that will solve just about every problem we have! Lol!

We need Later Control. There are too many of them. Close UMKC Law.

Anti gun libtards think black gang bangers are teh only people on earth that should have firearms. They consistently sell out their own to pander for votes. Stupid little white apologists buy it all.

I think first we need to make laws against hurting or killing people........oh wait a minute?

And doctors through BLATANT malpractice. Where is the outrage?

In today's world what happened and the facts of what happened get so twisted by the media that it reaches a point that the general public has no idea what is what. So most times we are left to ponder and wonder. But if anything factual is reported one faces the possible public outrage of showing the truth.

The gun as much as any motor vehicle is a tool that when it is misused can result in one or many deaths.

When the courts decide to really deal with the ones who cause the deaths then and only then will you see the numbers drop in people dying from said tools usage.

Hillary Shields, a founder of Indivisible KC, and Democratic Party candidate for MO Senate from Eastern Jackson County suburbs (Lee's Summit) will go down to defeat on NOV 7.

She talks about growing up in rural MO and once going hunting with relatives but she's a typical liberal Democrat who wants to punish/restrict law-abiding citizens from exercising their right to protect their families.

Ban the blacks and you have gun control. Simple as that.

Now the family is asking for donations..elitist liberal scum.