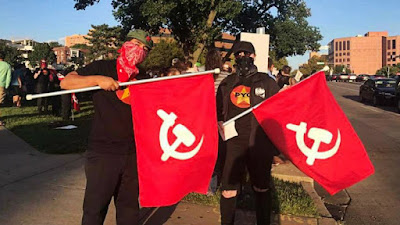 The culture war continues to intensify as Kansas City ANTIFA bolsters their public presence at local protests and continues their community outreach.

MSM touted a recent Country Club Plaza protest but downplayed these militant activists who garnered most of the attention that night among a crowd of far more middle-of-the-road progressives.

Their description of the night's festivities . . .

This is interesting because a little less than 900 DACA recipients are currently enlisted in the U.S. military and it's unclear if they're wild about Communist flags on parade to support their cause.

THIS EPIC SHOT OF ANTIFA FLEXING ON THE PLAZA CONFIRMS TKC REPORTING THAT THESE ACTIVISTS ARE GAINING MOMENTUM IN KANSAS CITY!!!

Like it or not, resistance against Prez Trump in this cowtown is growing increasingly strident while Republicans and their own radical right contingent find themselves engaged in near civil war.

Meanwhile, more than a few locals sent these images our way . . . Some sharing exhilaration while others expressed dismay as the old school soviet hammer & sickle paraded through the streets of the Plaza.