OF COURSE ALL YOUNGSTERS DESERVE SAFETY AND SUPPORT WHILE IN SCHOOL . . . But the language of the ordinance has raised eyebrows among Kansas City Conservatives.

Here's the actual title of the resolution from the KCPS which remains only partially accredited . . .

"Condemning violence and hate speech, expressing support for Muslim students and those perceived as Muslims: Adopted by the Kansas City Public Schools Board of Education September 28, 2016"

We'll reserve judgement until we hear back from our blog community but here is a fact . . .

THE KCPS RESOLVES AGAINST HISTORY OF U.S. RACISM IN DEFENSE OF MUSLIM STUDENTS IN A CONTROVERSIAL DOCUMENT AS LOCAL MEDIA MOSTLY IGNORES THE BACKLASH FROM PARENTS AND VOTERS!!!

The most controversial passages of this legislation have been underlined in bold . . . Here's a look at the language of the document:

WHEREAS there are more than 3 million Muslims living in the United States today, and approximately 30,000 living in the Greater Kansas City area, making invaluable contributions to our economy, our social and political life, and our culture; and

WHEREAS discrimination on the basis of religion, and against Muslims and those perceived as Muslims in particular, is deeply embedded within our country’s long history of racism and xenophobia; and

WHEREAS there has been an unprecedented backlash since the September 11th attacks in the form of hate crimes and employment discrimination toward Arab and Muslim Americans and those perceived as Muslims; and

WHEREAS Muslims, Muslim Americans, and those perceived as Muslims, are frequently the targets of abusive and discriminatory police practices sanctioned by the state including surveillance in their neighborhoods and places of worship; and

WHEREAS the recent escalation of hateful rhetoric against Muslims, those perceived as Muslims, immigrants, and people of color is especially harmful to children, as it has a negative impact on their psychological well-being, the health of their peer relationships, and their ability to thrive in school . . .
################

Now therefore be it resolved, that the Kansas City Public Schools –

(1) Condemns all hateful speech and violent action directed at Muslims, those perceived as Muslims, immigrants and people of color;

(2) Commits to fostering a school environment that promotes respect for and curiosity about all religions and cultures, affirms the equal humanity of all members of the community, and rejects all forms of bullying and discrimination;

(3)Commits to instituting school policies and setting an educational curriculum that reflects the values expressed in this resolution via training of staff and teachers, the inclusion of diverse resources to supplement in-class curricula, and the creation of safe spaces for students to address school-based bullying.
################

Confirming this deet from the Kansas City Board Of Education website . . . Readers can recreate the search for their own research purposes . . . 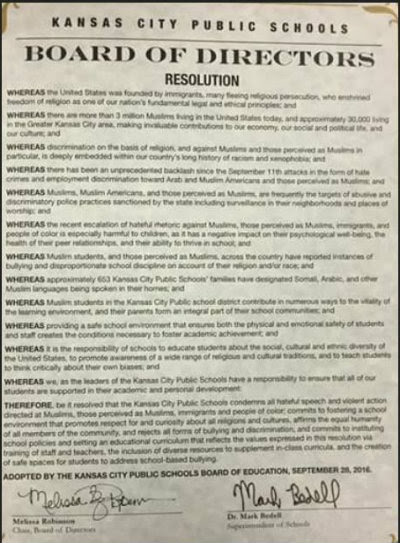 Motion was made to approve board item 017-SEC-009-008 Board Anti-Hate Resolution.