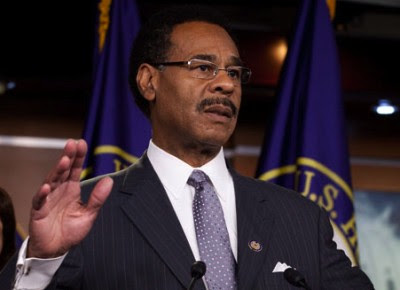 Congressman Cleaver's office notes a renewed commitment to surveillance of the police in the new year . . .

Congressman Emanuel Cleaver, II has introduced The "Camera Authorization and Maintenance Act of 2014" or the "CAM Act," a bill to encourage police officers to wear a body camera.

"This legislation is important to any and all members of the public who encounter a law enforcement officer, and it is important for the officers themselves," said Congressman Emanuel Cleaver, II. "The goal is to increase transparency, protect the rights of all parties involved, and to provide better evidence for any police investigation, both for the citizens and the officers." The bill would:

Require that all state and local law enforcement agencies who receive Department of Justice grants have their officers wear a body camera.

Create a grant program to help agencies purchase the equipment.

Set guidelines for the use of body cameras.

Create a task force to study and make recommendations on community policing and to determine protocol in body camera training. The task force is also required to study the effectiveness of the usage of body cameras one year after implementation of the policy and the impact that citizen review boards could have on police misconduct.

Provide for a report on the Department of Defense 1033 program.