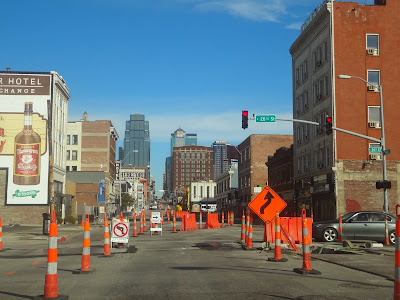 THIS REPORT CONFIRMS A KANSAS CITY CROSSROADS RESTAURANT LOSING NEARLY HALF OF ITS BIZ THANKS TO TOY TRAIN STREETCAR CONSTRUCTION!!!

Most of the highlights are mine, Here's the word: 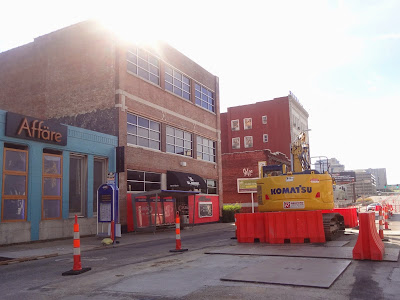 The city promised the construction would last no longer than 3 months. They are at 9 months now. After 9 months the cross street (19th) is open, Main is still a nightmare.

They promised traffic would continue, uninterrupted. I guess it’s uninterrupted as long as you don’t want to turn.

It is so convoluted that after making the journey, most don’t want to return to the corn-maze like adventure, until the construction is complete (perhaps 2016).

The restaurants in that area used to DID a thriving lunch business. You have the Rieger (lunch closed), Extra Virgin (might as well be closed for lunch), Affare open, but barley making it. Michael Smiths, closed now for lunch . . . Anton's up the street varies.

According to the owners, most have seen their business drop 40% from a year ago. Two of the restaurants are James Beard finalists or semi-finalist… perhaps the best food in the city… Nothing to sneeze at…. 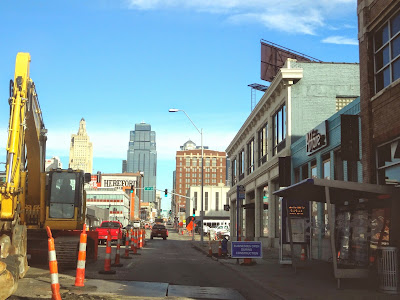 All of the restaurants chose the Crossroads area because it was urban / trendy. All of them wanted to be a part of that area. This is, of course,the same area the city had all but abandoned until the property became trendy… City then moves in for the ultimate kill.

The restaurant owners and Crossroads managers have met with the city. A lot of promises were made 3 weeks ago. None delivered. oh wait… tiny blue signs popped up saying "business are still open during construction” — At this point, Restaurant owners believe the city wants to drive them out of business and franchise the area like they unsuccessfully have attempted with the Power and Lights (are off) District. — that worked out really well.

Adding insult to injury, city raised the health department fees…. Nice… let me help kill your business and add a tax on your way down...

Here is my prediction. Great restaurants will move to areas more accommodating a few block away. Guessing Ks….

Streetcar line will bring in chains, city will subsidize chains, and then chains will fold because NO ONE GOES TO DOWNTOWN TO EAT AT Wendy’s. Or the like.
###############