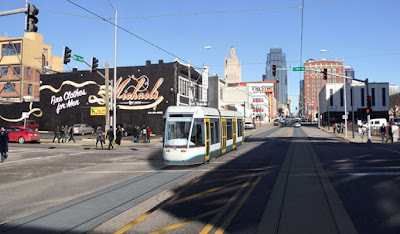 Opponents and organizers AGAINST that Kansas City Downtown Toy Train Streetcar are thinking out loud . . .

"Now that the lawsuit didn't pan out, what about an effort to get a petition on the ballot that could stop the streetcar in its tracks? Outside of the TDD, we are being taxed without voting on this since City Hall is dipping into general revenue and since this is continually touted as a "starter line" with planning for more lines already underway"

Thought . . . Given that the votes for this monstrosity inside the TDD were just a few hundred . . . Would a petition against the Streetcar within the TDD have to reach just a percentage of that tiny voter threshold in order to be considered? These questions and so many more are soon to be answered . . . And then probably ignored by Mayor and City Council.