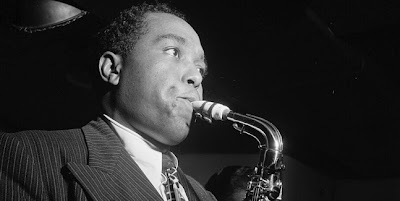 Kansas City Public Library reminds us that the legacy of "The Bird" lives . . .

"On March 12, 1955, famed jazz musician Charlie "Bird" Parker died following a 15-year addiction to heroin and alcohol. The Kansas City native had become one of the greatest alto saxophonists in the world thanks to his innovations in the "bebop" jazz style.

Parker was born in Kansas City, Kansas, on August 29, 1920. He grew up in Kansas City, Missouri, where he played in jazz clubs as a teenager and young man. The local jazz culture based in the Vine Street nightclub district cultivated his talents as a teenager. Indeed, it was during this period that Kansas City made notable contributions to jazz with hometown artists such as Count Basie, Bennie Moten, and Buster Smith."

Every year a smaller and smaller cadre of Kansas City jazz d-bags gather to celebrate Charlie Parker's birthday but I'm thinking that the day of his demise offers more of a teaching moment given that right now heroin is making a big comeback in Missouri and seems much more popular than Jazz at the moment.