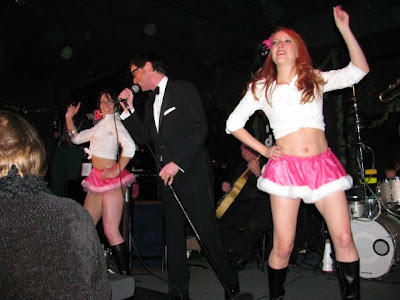 I had to do a bit of soul searching about this one but I decided that I'm a big enough fan of Kansas City's Greatest Living Jazz Man Dave Stephens to let a few old rivalries simmer . . .

THE NEW P&L DISTRICT JAZZ CLUB WILL KICK OFF THEIR GRAND OPENING WITH A PERFORMANCE FROM THE DAVE STEPHENS BAND!!!

As with anything concerning Dave Stephens . . . It's going to be a hell of a show that will inspire, KICK-ASS and probably remain the best thing that ever happened to the place.

Again, DAVE STEPHENS IS THE BEST THING ABOUT KANSAS CITY JAZZ . . . And that's why we're breaking news of a venue employing his talents to start their journey.

A PR Girl was bugging me about the place for awhile and I'm still ignoring her because it's not my job to promote a $12 mil. Kansas City tax hole . . . Nevertheless, I can't argue with the fact that they have done the right thing with their opening night festivities.