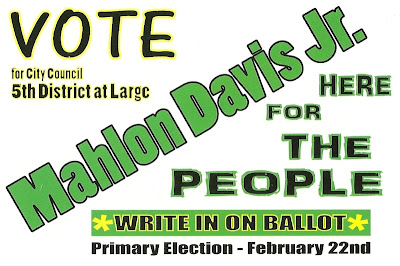 Without question there has been a lot of anger, labeling and name-calling from proponents of E-Tax renewal.

Rather than engage in a serious discussion of the merits of the E-Tax that justifiably places a levy on d-bag Golden Ghetto interlopers, there's simply been a sense of entitlement and no serious (or even halfway entertaining) discussion has not been allowed to develop.

Columnists at Kansas City's paper-of-record charge that opponents of the E-tax are "angry" or even "ignorant" in their support of the Sinquefield backed E-Tax repeal.

5TH DISTRICT AT-LARGE AND WRITE-IN CANDIDATE MAHLON DAVIS JR. HAS DEVELOPED A WHITE PAPER AND A DETAILED PLAN FOR KANSAS CITY LIFE WITHOUT THE E-TAX!!!

Here's the rather bold title:

TAKE A LOOK AT THE PLAN MR. DAVIS HAS DEVELOPED ON A BLOG HE RECENTLY SET UP!!!

What I like about the plan is that it's not too dependent on pie-in-the-sky projections about biz coming to KC once all of the revenue is gone. The plan developed by Mahlon Davis Jr. is mostly focused on cost cutting and improving efficiency.

Also, given that the E-Tax issue is one that's dividing all of KC Proper . . . It's rather savvy that he continues to use this issue as part of his ongoing campaign. 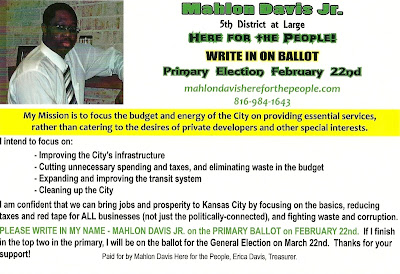 Mr. Davis deserves credit for at least putting his thoughts in writing while other supporters of an E-Tax repeal rely only on vague anti-tax sentiment.
Posted by Tony at 2/08/2011 05:23:00 PM

That is one dumb looking young man.

The E-Tax is toast.

A Voter With Pride said...

Scott Taylor (Mr. Cathy Jolly) seems to favor schoolyard bullying because as a member of the Center School Board he refuses to support an anti-bullying policy.

Now Scott Taylor wants our vote to be a City Council person.

Say NO to Bullying!
Say NO to Scott Taylor!

Cathy was never willing to stand up publically against bigots, so why do we think her husband will?

Do not vote for weak people who are scared to stand up for equality of all people.

Yes, Scott Taylor is of mediocre intelligence like his wife; regardless, Mahlon's tactic will fail because no one will be able to properly spell Mahlon's full name, and if they do, they will probably omit the "Jr." on it. Then every ballot that is not written in exactly as he has filed with the Board will be rejected.

That whole sign, and that whole message... way too busy.

What's with the green? Is this truly an Irish Jig???

He came from the same part of Ireland that Terry Riley came from, I guess.

Scott Taylor deserves to lose because he is a spineless worm who cannot act on the basis of right and wrong.

Something for Everyone said...

But Scott Taylor might be running for election because he believes that spineless worms deserve to be represented too!
Makes more sense than some of the other campaigns!

I know I speak for other old bigots who are happy to know that Center School District is being run but hard core, knuckle-dragging advocates for hatred like John Tancredi, who receives the slavish support of eunuchs like Scott Taylor.

My God, we moved to this district in order to hide from the Negro race, so we are not going to sit back and see our schools infested by fairies and dykes. You let the fairies and dykes in and you can almost be sure that Mexicans will follow and then you might as well just invite all the flea-bitten A-Rabs to set up tents along Holmes Rd. I suppose it could be worse and we could see Jews moving in but I think most of them have move to Johnson County.

Anyway, I just want to say that I am proud of the eunuch Scott Taylor, because he would never think of standing up for Commie beliefs like justice and equality that would only lead to our children contracting VD at a young age.

Atta Boy Scott Taylor -- I would pat you on the back if you had one.

Finelly somebody with a plan two big thumps up!!!!

This young man has my vote!!!! Life after the E-tax love it.

Looks like the 6th at large candidates are bored tonight.

Good to see scott taylor has a commanding enough lead to draw their ire so close to election.

Thank heavens this circus is almost over.

Mike brown vs scott taylor in the general

Get your licks in now, you only have two weeks left of your psuedo relevancy.

Charlie Angel is the only candidate for 5th District at large that has ever met a payroll, run a business, or has the balls to clean up the cesspool in Kansas City.

Keep pushing forward Mahlon and never give up. Hell of a job!!!

Down with the E-Tax!!! Mahlon Davis my 5Th District At Large city councilman.

Good for you Mahlon. Keep it up.

Since Mahlon Davis is a write-in candidate if are when he gets past the prilimery and he makes it to the general will they put his name back on the ballot!!!

2/8/11 9:59 PM
And I think Mahlon has the balls to clean up that dirty city hall. He is one of a hand full of candidates that is speaking out against the E-Tax and has came up with a plan. That young man has heart in my book, I take my hat of to him for just running, he is a winner in my book for that alone.

From one conservative to another said...

Mahlon great job buddy don't worry about the nah sayers, keep your eyes on the prize.

I admire the plan, and I appreciate the thought, but . . . some of the things he proposes to cut don't get funded by the e-tax now, so cutting them won't make up for the loss of the tax. Also, he concedes the possibility of having to "trade" the e-tax for a "land tax." Why would a land tax be any more desireable to Kansas Citians than an e-tax?

That said, I favor privatizing some city functions (e.g., water) regardless of the e-tax, and for that reason alone may vote for Davis.

Because people currently who own vacant lots don't pay taxes on those. Look at it from a small business stand point. If my business grosses 120,000 a year I owe the city 1200 dollars. Which equals about a month or two of rent for your business I can move 5 miles and keep my two months rent and still service the same group of people. the E-tax hurts business and if we din't stop it we will be the third largest city in area soon..

Great points, I am for some of his ideas and some I have a small problem with and would like to talk to him to see if he could clear it up for me, But you still have to give this guy credit.

About time somebody come up with a plan.

Good bye to the E-Tax.

Mahlon is the right choice for the 5th District. That Angel guy is a junk yard dealer who is a parasite on the community. He will serve to loosen the code violations because he is a code violator himself.

Same with SSB. Why can these people even run?

Mahlon is an Uncle Tom.

Scott Taylor is a worm who has never stood for anything, just like his dumb wife. It does not surprise me that Taylor would cave to the haters.

I would not trust Taylor to stand up for anything. He would through Cathy to a gang of rapists.

MAHLON, idiot, GIVE IT UP!!!
YOU COULD NOT GET 400 SIGNATURES!!! JUST HOW INEFFECTIVE ARE YOU???
You had fucking Fall and half of winter to get the legal signatures. What the hell were you doing? What type of go-getter balls do you lack?
The people have spoken, they would not sign your petition for office.
Get involved and learn basic civics. I thought you were a jerk back in November... just proved it today with your ongoing lame stupidity.

Actually toadstool I think he told me at the last debate I attended he has 580 signatures. a 150 were disqualified have you been to the 5th district only 7 percent of them voted in Nov so maybe not enough voters in his area? Maybe you should contact the candidate to find out the situation before you sound like a dumb a**