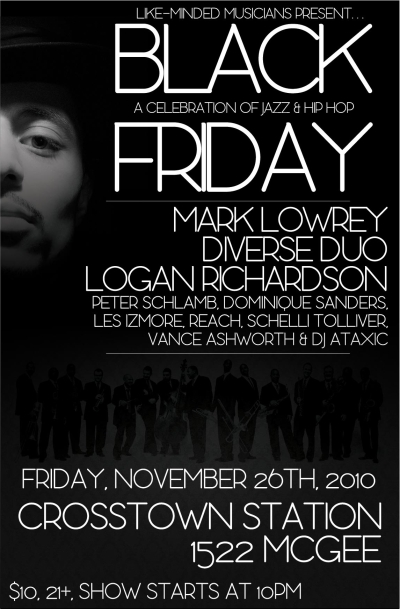 Seriously . . . This is the best way to celebrate Black Friday in Kansas City. Even better, this even doesn't feature the work of Asian toddlers working in sweatshops.

An event that will provide all the excitement of the ‘biggest shopping day of the year’ without the conventional credit card debt that typically follows.

October 19th, 2010: Jazz and Rap have been bedfellows since the early part of Hip Hop’s Golden Age in the 1990’s. It began modestly as producers used Jazz standards as source material for sample ideas. Over time the two widely influential genres began to experiment and collaborate in a number of different ways. The live performance platform has been one of the most notable ways. Given Kansas City’s rich Jazz traditions, artists from both sides of the tracks in Kansas City have taken a special liking to one another over the last 12-18 months. Pianist Mark Lowrey, winner of a 2010 Pitch Music Award for Best Jazz Solo Artist, created an improvisational ensemble of Jazz musicians and emcees for the successful “Mark Lowrey vs. Hip Hop” shows (two on the books to date). Trumpeteer Hermon Mehari paired his band, Diverse, with Les Izmore for a live tribute to Common’s Like Water For Chocolate in the spring of 2010. Several months later, Reach sat in with Mark Lowrey, Hermon Mehari and Ryan Lee (of Diverse) for a performance at the Pitch Music Awards.

On November 26th, the former ‘players’ will all reassemble for one night only at Crosstown Station in downtown Kansas City (1522 McGee) for “Black Friday”.

This show promises to be a combination of all the aspects of the aforementioned shows with a few new ideas and twists (think everything you’ve heard from this bunch previously…on steroids). The night will comprise tributes to classic Rap and Jazz material. It will also feature live renditions of original Les Izmore and Reach tracks. Mark Lowrey will be flanked by: Hermon Mehari, Ryan Lee, Dominique Sanders, Peter Schlamb, renowned saxophonist and Kansas City-native Logan Richardson, partners-in-rhyme Reach/Izmore and backing vocalists Schelli Tolliver and Vance Ashworth. The show begins promptly at 10pm with DJ Ataxic on the wheels. Patrons must be 21 and pay the $10 cover charge to enter. This will be an evening full of raw fusion and much more colorful than its title suggests. Buyers beware (there).
# # # 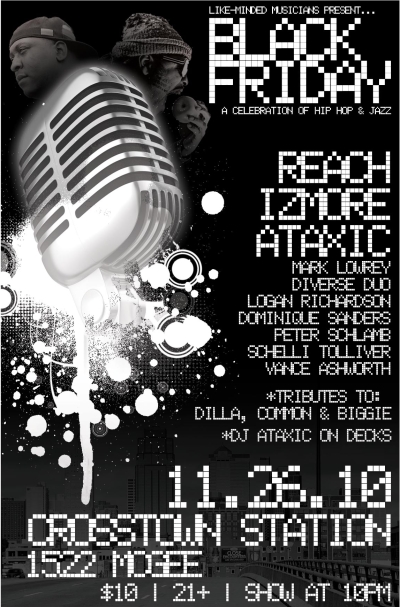