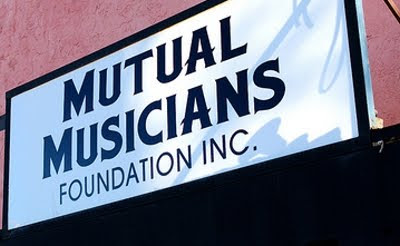 Thanks to a rather KICKASS TKC TIPSTER for providing all of the relevant details regarding a recent switch up that put a popular radio program up against the new management at a local institution.

"The top board members at the Mutual Musicians Foundation (MMF) wanted money from Mark Edelman to continue to use their space. MMF recently underwent a turnover in the board and management. Mark's deal was cut with the previous management.

As I understand it from a couple folks I know who were involved (none of my sources is Mark), Mark supplied the piano and the crowd he drew spent over $400 per week on drinks at an hour when MMF generally generates little revenue. The new board president argued that if Mark rented the Gem, he'd be paying $2000 per performance for the space. But the show is not making any money and couldn't offer anything more
than it already provided.

Mark asked the new board for a formal request. I'm told the board argued about it for months, while Mark repeatedly told them he needed to know what they wanted because he needed to know if he had a space for his show. Finally, they requested $2000 per month rental. Mark decided to move on. To his credit, he has said nothing negative to the press about MMF.

By his moving on, MMF is losing the upstairs piano he provided and the drink sales from the crowd he provided. Bobby Watson quit the board over the issue. The treasurer quit over this and other issues. And a third board member quit for reasons I don't know.

I've known people at MMF for probably 25 years. Occasionally they've had good management, but right now does not appear to be one of those times."

And all of this has the radio show changing it's name to the "12th Street Jump" and a great many confused Jazz fans getting grossed out while looking up the search term MMF - Which is a moniker normally used to describe women having sex in an uncomfortable place (not the back of a Volkswagen).