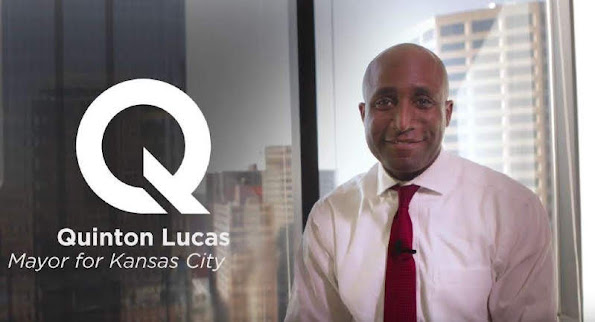 File this one under "preaching to the choir" but we're sharing the missive in order to offer a more complete view of the discourse that most other local media missed.

"Kansas City is reportedly the sixth most-dangerous city in the country, according to FBI statistics. There was a record 178 homicides in 2020 alone. Yet Mayor Lucas has remained all in with the race-obsessed, anti-white, neo-Marxist Black Lives Matter agenda. This agenda includes huge cuts in Kansas City’s police budget as well as more minority community control over police hiring, firing, disciplinary actions, budgets, and policies."

Despite the impulse to dismiss the right-wing report because of the publication's controversial political slant . . . The FrontPage screed is important because it reveals that staunch conservatives have now added Kansas City Mayor Quinton Lucas to their enemies list.

Agree or disagree with the conclusions, the article resonates because it draws a line in the sand and demonstrates that culture war threatens to consume the municipal discourse under the tenure of the current administration.

Friendly advice from TKC that Mayor Q and his acolytes will dutifully ignore . . . This is a losing battle and the most successful Midwest politicos on both the left and the right have successfully dodged some of the most acerbic partisan politics in favor of quietly amassing pork-barrel government spending with a smile. Maybe the desperate need for social media relevance has negated this cowtown political tradition . . . And we might be on the way to determining elections by way of likes & shares.

Either way, the report offers a worthwhile summary and should inspire conservatives across the nation to view Kansas City & Mayor Q in a negative light.