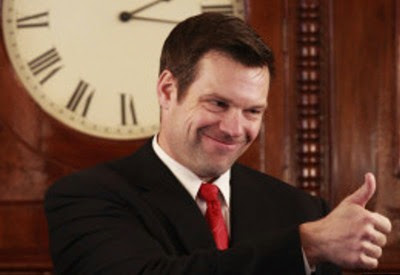 At least in the world of politics . . . We don't always have to "trust the science" from clearly progressive partisan sources.

Real talk . . . Nobody knows who Mattivi is . . . He might be a great guy but for most voters he's an unknown commodity . . . And that's why it's okay to be just a bit suspicious of a PROG BLOG pushing his candidacy . . . Even if the ambitious pay-for-play outlet wants to replace the newspaper.

KRIS KOBACH IS ONE OF THE MOST WELL RECOGNIZED GOP POLITICOS IN KANSAS!!!

TKC doesn't note this as a fan . . . I'm pretty sure he would deport me if given a chance . . . But political disputes with the right-wing firebrand doesn't negate his EPIC name ID.

After supplemental information about Mattivi and his two opponents was pushed out to participants in the poll, Mattivi improved to 34.5%, Kobach fell to 21.4% and Warren slid to 10.9%. The number of undecided was reduced to 33%.

The Mattivi poll described Kobach as a former secretary of state who was a “warrior against illegal immigration” and had filed lawsuits against the administration of President Joe Biden. It described Warren as a state senator supported by influential Topeka lobbying associations.

Mattivi was a federal prosecutor for more than two decades and is the only candidate among the three with experience in the Kansas attorney general’s office.

TOPEKA - Attorney General candidate Tony Mattivi's campaign released a poll Thursday pointing to the high percentage of Kansas Republicans undecided about who to vote for in the race and evidence Mattivi's biography as a federal prosecutor who took on terrorists and other criminals could be persuasive at the ballot box.