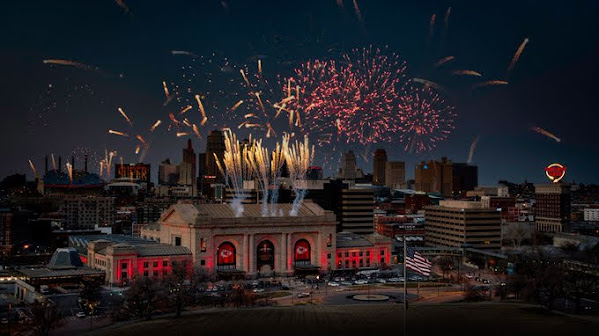 Didn't it seem like July 4th was kind of a drag and nobody really wants to party??? Heck, we even noticed fewer illegal firecrackers and slightly less celebratory gunfire this time around.

A few examples and ongoing debates we consider tonight . . .

Pride flag hate crime is a horrible thing and nobody in the mainstream condones it. Sadly, it's one of many unsolved crimes this Summer.

An LGBTQ display at a church in Kansas City, Mo. was defaced with a hateful message, just days after an openly gay candidate running for local office said that vandals had spray-painted a homophobic slur on one of his campaign banners.

An idea floated by Kansas City Mayor Quinton Lucas this week to bring back the Kansas City Police Department's horse-mounted patrol unit is getting mixed reviews - even though the likelihood of bringing back such a unit is low. Following a quadruple shooting and vehicle break-ins over the weekend, Mayor Lucas called for the KCPD's mounted patrol unit to be reinstated.

The showdown over abortion is coming soon in Kansas . . . Political sign shenanigans might not be a great indication of how the vote will go . . . But we can't help but notice one side is doing most of the vandalism & stealing rather than engage in forthright debate.

Sign vandalisms, thefts on rise ahead of vote on constitutional amendment

WICHITA, Kan. (KWCH) -As the Aug. 2 primary election approaches, Kansans are seeing an increase in political signs across the state being defaced, destroyed or plucked from yards. The signs reflect views on an issue voters on both sides feel strongly about as Kansas voters get to decide the fate of abortion rights in the state by voting on an amendment to the state constitution .

No . . . The standup comedian hero isn't going to beat Vlad & the Russian army and the U.S. might have to get a better plan than a pricey proxy war.

Russian President Vladimir Putin accused the West of waging a proxy war in Ukraine on Thursday and said that the world should know the war is just beginning, nearly five months after launching the invasion. "Everybody should know that largely speaking, we haven't even yet started anything in earnest," Putin told parliamentary leaders.

Have you met anybody who thinks Prez Biden is doing a good job??? Honestly, his predecessor garnered an army of troll fans but I've yet to meet ANYONE who likes the current White House honcho.

How low can he go? President Biden's approval rating has crashed to just 30%, its lowest mark yet, in a new national poll. The Civiqs Poll's daily tracking survey of registered voters found less than a third of Americans giving the thumbs-up to Biden's on-the-job performance - and a whopping 57% disapproving.

And all of this inspires our TKC playlist tonight on the topic of Summertime hardship . . .

An 80s classic offers context and reminds us that it doesn't "get better" but that we should take comfort given that it has always been bad. Sometimes even worse . . .

Here's a right-wing rapper song because the Summer is supposed to be stupid . . .

A classic rock take on a 50s classic shares a recurring theme . . .

This song makes us want to slap Chris Rock . . . Or, more accurately, should serve as a caution that, for better & worse, we shouldn't let nostalgia overtake the way we view the current state of the world.