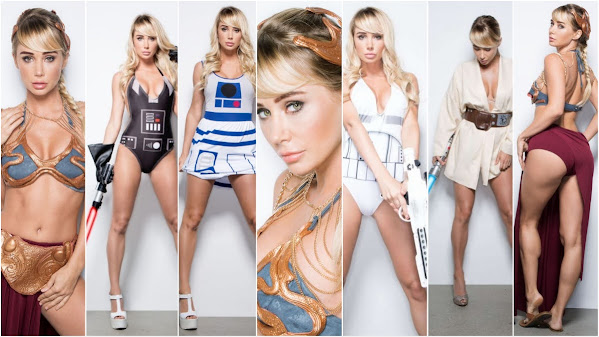 A lot of people don't really know this but hottie Sara did more than her part in helping "May the 4th be with you" become part of the Internets lexicon. Tonight her body of work inspires this peek at pop culture, community news and top headlines . . .

Bubic fails to get out the first, offense fails to hit in 10-0 loss to St. Louis

The Royals laid a complete egg in the rubber match against the Cardinals falling in 10-0 blowout to lose the series. Kris Bubic continued his first inning struggles, and failed to get out of the inning before being lifted for a reliever.

Food prices going up the chancellor at the University of Missouri - Kansas City wants to make sure students don't go hungry.A new on-campus food pantry opened Wednesday and it's offering more than just groceries.Canned foods like soup and vegetables now fill the shelves of what used to be part of the bookstore at the UMKC student union.

The Greater Kansas City Chamber of Commerce revealed its Top 10 Small Businesses on Friday, which includes several companies that made last year's cut.

KANSAS CITY, Kan. - For Almost seven months tenants at a Kansas City, Kansas apartment complex have had to go out of their way to get their mail. After weeks of getting the runaround, they've had enough and reached out to FOX4 problem solvers.

Sara Underwood's Instagram Photos Are Truly out of This World

Sara Underwood is living a life like no other! The Playboy model and former Attack of the Show! co-host is currently residing at Cabinland, a series of tiny cabins and structures built by her and her boyfriend, Jacob Witzling, in the Pacific Northwest.

President Biden on Wednesday, reacting to the leaked draft opinion signaling the Supreme Court's intent to overturn Roe v. Wade, slammed Republicans, said the controversy is "about a lot more than abortion," and warning that the "MAGA crowd" is "the most extreme political organization that's existed in recent American history."

WASHINGTON (TND) - Former President Donald Trump may not have been on any ballots Tuesday but he still had a notable say in numerous elections. According to Politico, Trump had a “clean sweep” of sorts in the Indiana and Ohio primaries with all 22 of his endorsed candidates winning.


Covid's toll in the U.S. reaches a once unfathomable number: 1 million deaths

The United States on Wednesday surpassed 1 million Covid-19 deaths, according to data compiled by NBC News - a once unthinkable scale of loss even for the country with the world's highest recorded toll from the virus. The number - equivalent to the population of San Jose, California, the 10th largest city in the U.S.

The United States has passed along intelligence to Ukraine about Russian military units, allowing the Ukrainians to target and kill several Russian generals, senior U.S. officials told The New York Times. Since Russia invaded Ukraine on Feb. 24, approximately 12 Russian generals have been killed on the frontlines in artillery strikes and other attacks, Ukrainian officials said.

It's May the 4th! Here are 13 Star Wars games worth picking up in this year's sales

It's Star Wars season, and several game platforms are having massive May the 4th sales. We've combed through each, picking out games like Star Wars Jedi: Fallen Order, Battlefront 2, and Star Wars: Knights of the Old Republic that are worth picking up.

KANSAS CITY, Mo. - Cruising with the windows down in Kansas City, a blur of cement, skyscrapers and lights flash by. But soaring high above the city sits an unseen, elevated community with some Kansas City buildings housing secret greenspaces, venues and pools that hang just above our heads on unsuspecting rooftops.

Limited James Chang collaboration sandwich. // Photo by Patrick Moore No one has ever been excited to go to Gladstone, Missouri before. Until now. Not only do they have weed stores, but they have The Italian Sausage Company. The second you walk in, you get Italian market and deli vibes-from the decor to the black and white tile on the...

More rain for your Thursday

Hide Transcript Show Transcript OF HEAVY RAIN TEMPERATURES WILL PROBABLY STAY PRETTY CONSTANT TO WHERE THEY ARE RIGHT NOW.