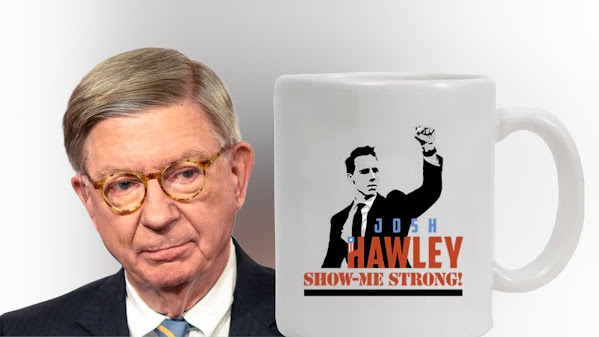 George Will was a right-wing opinion maker back when you doing keg stands at a 3rd rate state college.

He's more thoughtful and brilliant than most of the pundits paid to talk for a living on Fox News and his writing has been the foundation for the vast majority of modern GOP policy that isn't written on the back of a cocktail napkin.

And all of THAT was merely a prelude in order to provide context for an EPIC SNUB that's VERY important inside the Beltway and deserves just a moment of reflection from local voters . . .

“The 328 senators of the previous 50 years have illustrated the tyranny of the bell-shaped curve: a few of them dreadful, a few excellent, most mediocre,” Will wrote in the Post on Wednesday. “Although Josh Hawley, Missouri’s freshman Republican, might not be worse than all the other 327, he exemplifies the worst about would-be presidents incubated in the Senate.”

Hawley, Will wrote, has since he arrived in the upper chamber in 2019 “hit the ground running — away from the Senate.”

“Twenty-four months later, he was the principal catalyst of the attempted nullification of the presidential election preceding the one that he hopes will elevate him,” Will argued. “Nimbly clambering aboard every passing bandwagon that can carry him to the Fox News greenroom, he treats the Senate as a mere steppingstone for his ascent to an office commensurate with his estimate of his talents.”

Longtime Washington Post columnist George Will says the Constitution should be amended to bar senators from running for president, specifically pointing to Sen. Josh Hawley (R-Mo.). "The 328 senators of the previous 50 years have illustrated the tyranny of the bell-shaped curve: a few of them dreadful, a few excellent, most mediocre," Will wrote in the Post...