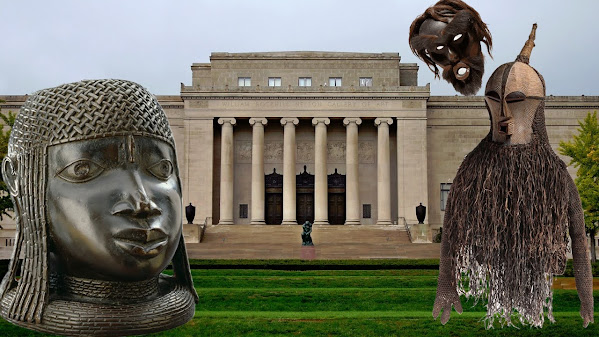 Crime news is piling up as the weekend approaches.

Accordingly, we offer this quick peek at allegations of real world cultural appropriation along with petty crime and more tragic local killing.

Though nothing new to Western institutions, Kansas City's most prominent museum, The Nelson Atkins Museum of Art, is a central figure in the unraveling global drama of Western institutions displaying stolen African art. In the late 1980s, the Nelson purchased a rare Nigerian artifact from British Art Dealer Lance Entwistle.


Man dies in shooting at a home in Kansas City, Kansas

KANSAS CITY, Mo. - A man died in a shooting at a home in Kansas City, Kansas, on Friday afternoon. According to KCKPD public information officer Nancy Chartrand, the shooting took place in the 900 block of Everett Avenue. No other information regarding the circumstances of the shooting was available.

KANSAS CITY, Mo. - Kansas City police are searching for a suspect believed to be involved in credit card thefts from vehicles. Police call the man a "prolific offender" who has caused financial damage in the Northland. The suspect will break into vehicles and steal credit cards to use them at stores like Wal-Mart and Best Buy.

KANSAS CITY, Kan. - The Kansas City, Kansas Police Department is investigating after multiple vehicles at high schools in the area were vandalized. School officials at Sumner Academy of Arts and Sciences sent a letter to parents and students saying the high school was one of several schools in the area that fell victim to extensive vandalism on cars that were parked near the school building.

LIBERTY, Mo. - The Clay County Sheriff's Office said a victim lost thousands of dollars to a scammer Thursday. The office said someone is calling people and impersonating a Clay County sergeant. The caller is telling people they have a warrant and need to pay up to clear it.

KANSAS CITY, Mo. - The Platte County Sheriff's Office said there was no assault in the bathroom at Park Hill High School Thursday afternoon. In a letter to families Thursday, Principal Brad Kincheloe said the school called law enforcement after a report of one student assaulting another student.

Medical marijuana sales are booming, and so is the need to keep the new industry safe. MISSOURI, USA - Police departments nationwide are experiencing a shortage of officers -- locally, the I-Team found out some of them are trading in their badges and going into an industry even they least expected.

KANSAS CITY, Mo. - Roger Kemp is honored posthumously by the award created in memory of his daughter. Kemp received the Crystal Kipper & Ali Kemp Memorial Award Friday for his work and legacy protecting women from crime. Jill Leiker, executive director of the The Ali Kemp Educational Foundation, accepted the award on behalf of Kemp, who died in March.

While some of the PAL kids now have their first baseball glove and have learned beginner drills, a focus on academics remains at the program's core. Windsor says that if a child is struggling, one of the officers might help them. A child life specialist might pitch in, or PAL may bring in a tutor to help.