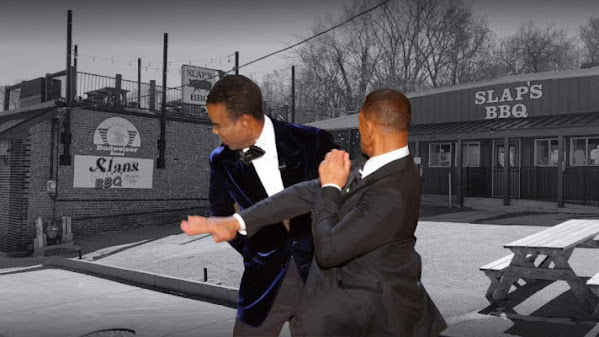 No, this isn't promo for the local biz and probably not condoned by their branding experts BUT we like their story nevertheless . . .

Slap’s BBQ (Squeal Like a Pig) opened in June of 2014 and started with just a few hundred pounds of meat. The KCK Central Ave location is a hidden treasure for fans of our local cuisine.

And so far this local spin on the Will Smith "controversy" has been my favorite chuckle.

Could Will Smith lose his Oscar? Explaining the Academy's code of conduct

Will Smith may be asked to hand back his Best Actor statuette following his live onstage assault of Chris Rock, industry insiders told The Post. The Academy of Motion Picture Arts and Sciences, which handed out awards Sunday at the Dolby Theatre in Los Angeles, has strict guidelines in its code of conduct.

The actress posted a message on her Instagram that read, "This is a season for healing and I'm here for it." Jada's statement comes after Will, 53, issued an apology of his own on Monday, writing, "Violence in all of its forms is poisonous and destructive.

When Will Smith retaliated for a joke at the Oscars by slapping Chris Rock, fellow comedians saw the incident from two angles: as a rich source of material for themselves, and as an assault on one of their own. "As Rock got hit, I got hit.


Will Smith Made the Oscars Memorable

A hit! A palpable hit! For years, people have wondered what to do with the Academy Awards. How do you freshen them up-make them topical, urgent, and crisp? How do you bring back the television audience, which has sunk to such drastic levels that the only guaranteed viewers are the immediate family members of the nominees, plus their more intelligent pets?

The father of Venus and Serena Williams said Monday he condemns violence a day after Will Smith slapped comedian Chris Rock at the Oscars ceremony - and then won an Academy Award for playing him in the movie "King Richard." "We don't know all the details of what happened," Richard Williams, via his son Chavoita LeSane, told NBC News.


Will Smith's mother: 'That's the first time I've ever seen him go off'

Carolyn Smith, Will Smith's mother, was gathered with family at her home in the Philadelphia suburbs Sunday night, excited to watch her son at the Academy Awards.


There's only one way Will Smith can make amends: give the award back

Opinion Normal text size Larger text size Very large text size Today, Will Smith apologised to Chris Rock for slapping him in the face during the Oscars on Sunday night. This apology is, of course, a good thing. Smith was way out of line. There is value in his publicly acknowledging this.