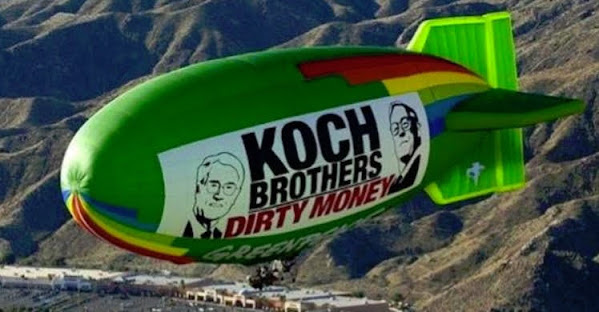 Credit to TKC readers who feel like these headlines are worthy of consideration tonight.

Koch biz news is important because this corporation basically rules Midwest politics and has been one of the most active amongst Republican donors.

Here's an overview that sums up the sitch nicely . . .

Driving the news: Koch’s Guardian Industries runs two manufacturing plants with roughly 600 employees. Ceasing operations would “hand over these manufacturing facilities to the Russian government so it can operate and benefit from them,” according to the statement from Dave Robertson.

The big picture: Since Russian President Vladmir Putin ordered the invasion of Ukraine last month, more than 400 companies have pulled out or scaled back their operations in the country, according to a running tally by Yale management professor Jeffrey Sonnenfeld and his team.

But, but, but: Robertson said if Koch followed suit, it would put the company's employees “at greater risk” than continuing business.

Koch says it will continue operating in Russia

Koch Industries, the conglomerate run by billionaire Charles Koch, is planning to stay in Russia even as hundreds of Western companies have scaled back operations there following the invasion of Ukraine.


It's Business as Usual for This American Billionaire's Russian Ops

In response to Vladimir Putin's calamitous invasion of Ukraine, companies from Chanel to McDonald's to Netflix have shuttered, at least for now, their Russian operations. But there has been one particular holdout raising eyebrows, Judd Legum reports in his Popular Information newsletter: Koch Industries.

As hundreds of major U.S. companies exit Russia over its invasion of , Koch Industries is staying put. The industrial conglomerate - the second-largest privately owned business in America, with $115 billion in annual revenue - is among those defying public pressure and continuing to operate manufacturing plants and sell products across Russia, while up until Wednesday remaining mum on that nation's relentless assault on Ukrainian cities.