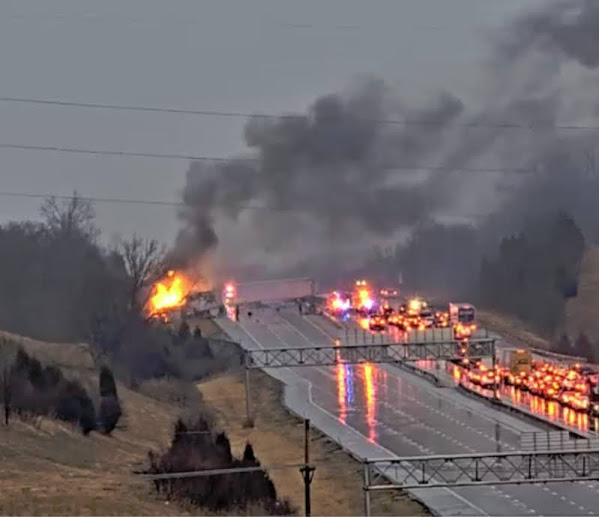 In this quick compilation we share a bevy of news for drivers as crooks, politicos, drunks and bad weather continue to threaten this town.

1 killed, 1 hurt in fiery crash on I-70 in Wyandotte County

One person was killed, another was hurt after a fiery crash involving two tractor-trailers and a pickup truck Friday morning on Interstate 70 near Interstate 435 in Kansas City, Kansas.The wreck was reported just before 7:45 a.m.The Kansas Highway Patrol said a preliminary investigation indicates that an eastbound pickup sideswiped a semi, causing it to go through a median barrier, hitting another semitruck.The highway patrol said the driver of the eastbound tractor-trailer is expected to be OK.

KANSAS CITY, Kan. - Increasing gas prices are putting local Kansas City food trucks in a pinch, and some are having to scale back on events they used to attend. Duke's Place is known for their creole, Cajun, soul food. Owner Vanessa Ward and her husband say costs for them are up across the board.

KANSAS CITY, Mo. - There are new reports of a crime that police say happens when gas prices are high. Overland Park and Independence police said they'd recently taken a handful of reports of thieves drilling into the gas tanks of vehicles in an effort to steal gas.

Hide Transcript Show Transcript The Mobile Command Center and at this hour, officers have spread across the city and the city's entertainment districts. As of yesterday, there were 26 fatalities so far this year. That's more than double the previous year. And tonight they're hoping to prevent something like that from happening.


Kansas City ranks 9th for drivers most dependent on GPS

Experts worry GPS leads to dangerous driving KANSAS CITY, Mo. - When you hop in the car, what's the first thing you do? Most would say turn the ignition, buckle up and drive. But a new survey conducted by Utires shows many drivers have added a fourth step to their driving routines: turning to their GPS to map driving routes.

KANSAS CITY, Mo. - Kansas City, Missouri, Mayor Quinton Lucas says the city is working on applying for a federal grant to study safety improvements along U.S. Highway 71 and the Prospect Avenue corridor. "We should not be seeing people die unnecessarily," Lucas said.

KANSAS CITY, Mo. - All northbound and southbound lanes of the Buck O'Neil Bridge are closed due to an injury accident. One person was seriously injured in the two-vehicle crash. The incident happened at around 7:10 p.m. U.S. 169 southbound drivers are being detoured off at 9 Highway.