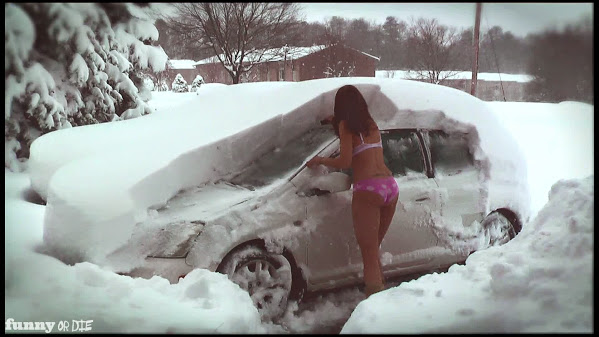 Our schedule has been crap this week so we're not making any promises at the end of the work week.

Nevertheless, we wanted clean out these links inasmuch as some many metro streets aren't getting snow cleared for early birds.

Accordingly, we share another blast of weather links and snark for our dear late night and early morning denizens . . .

Friday morning commute may be dicey, officials say watch out for black ice

KANSAS CITY, Mo. - Snowmageddon hit Kansas City with half a foot of snow Thursday morning. In some places a few inches more. Roads saw slide offs and close calls. If you're wondering what is in store for Friday morning's commute - more of the same.

It's been a long day for Kansas City's snow crews but they're going to continue their work to clean up the roads for the next 24 hours."Yeah, it's here, right?

KANSAS CITY, Mo. - After Ray O'Kelly closed his gym due to inclement weather in Waldo, he decided to keep on working. "What should I do today? I'll just hop in the truck," O'Kelly said. "[One person] goes, 'Thank you, do I owe you anything?' I'm like, 'No.'

KANSAS CITY, MO (KCTV/AP) -- The largest snowstorm Kansas City has seen in seven years left many in the metro inside or cleaning streets. The storm began overnight, with sleet and freezing rain and fog along a swath from southern Kansas through the middle of Missouri.

Some Kansas City drivers struggled with this snow

In Johnson County, many drivers struggled on the interstates, main roads and side streets.One couple got stranded at 95th and Monrovia streets. It took five people and about 15 minutes to get them free.The Tucker family got high centered while trying to get Peggy Tucker to her job at Garden Villas of Lenexa - a retirement community."I was turning the corner over here and the car just went sideways.

OLATHE, KS (KCTV) -- The City of Olathe said on Thursday night they received 9 inches of snow and provided an update on how plowing the roads is going. "Snow stopped falling around 2:15 this afternoon and our count currently stands at 9 inches!" they said. "Arterial roads are plowed and treated," they continued.


Hoofing It Amid Cowtown Arctic

On a day like Thursday, it was much easier for Nick Schump to walk to the store than try to drive it."It's quite a bit, you know?


The Dotte Deal With Deluge

KANSAS CITY, KS (KCTV) -- The Unified Government of Wyandotte County and Kansas City, Kansas shared an update on Facebook this evening about how their efforts to clear today's snowfall is going. Here is what they had to say: The snow has tapered off, and additional accumulations are not expected.

For most people, Thursday's storm brought a lot of challenges, but there are always people out there who find a way to make it fun.Many families broke out the sleds and headed to Brookside for sledding at 57th and McGee streets."Well, you don't get many snow days, so you've got to take advantage of the ones you get," Emerson said."I love the snow and I wanted to have fun and everyone else wanted to do it," Stevie said."We were all thinking about doing this because it looked really fun.


Outdoors Near The Outskirts

Some people are determined to get out and get some things done no matter the weather. Olathe resident Elizabeth Burns and her 3-year-old daughter, Gwen, bundled up in snow gear Thursday and went outside to have some fun in the snow.

KANSAS CITY, MO (KCTV) -- It appears that today's snowfall has broken a record for this day that was set more than a hundred years ago. The National Weather Service Office for Kansas City, Missouri posted the statistic on Twitter this afternoon.


EVERYTHING In This Cowtown Is A Measuring Contest

KANSAS CITY, Mo. - Snow piled up for majority of the Kansas City region on Thursday, and the snow totals certainly prove that. Kansas City even broke a century-old record for daily snowfall for Feb. 17. As of noon Thursday, Kansas City had already seen 6.4 inches of snow hit the ground.


Golden Ghetto Takes It All In

SHAWNEE, KS (KCTV) -- The City of Shawnee says they received a whopping 10 inches of snow today. "Thank you all for your patience as crews work this challenging storm," the city said. "Our drivers have been working around the clock to get streets cleared," the city said.

Where are the snow plows? Track progress in the Kansas City area

KANSAS CITY, Mo. - After Kansas City's biggest winter storm of the winter season, many across the region have seen half a foot or more of snow Thursday. The National Weather Service reported, as of noon, Kansas City had already recorded 6.4 inches of snow for Feb.

The snowstorm striking Kansas City has completely covered Veterans Community Project Village. The organization says the village's vets can't get out safely until the walkways are cleared. The village has 49 tiny homes and a 4,600-square-foot community center are built specifically for homeless veterans.

KANSAS CITY, Mo. - Multiple school districts are canceling classes Friday after a record snowfall hit the Kansas City metro Thursday. Much of the metro has received nearly 10 inches of snow. Kansas City broke a century-old record for daily snowfall for Feb. 17 by reaching 6.4 inches around noon.

Heavy snow began falling on the Kansas City metro early Thursday morning, dropping an inch or so of precipitation each hour.


Added To Keep Things Even: Kansas City Also Has 'Snow Monsters' But They Ask For Money

February 17, 2022 Fairy-like "snow monsters" appear on a mountain in Japan - drawing thousands of visitors. Take a look at the strange phenomenon. Now Playing 00:54 Next Up 00:37 Hidden Weather Icon Masks

KANSAS CITY, Mo. - Some neighborhoods in Kansas City, Missouri, wouldn't see blacktop until days after it stopped snowing. But city leaders have tweaked snow removal plans, and residents have noticed the difference. Shana Skelton isn't used to having her street in south Kansas City plowed before breaking out the shovel.


Winter Chill For The Morning

Bitter cold to start, then warming into the mid-30s Friday

Hide Transcript Show Transcript SNOWLL TOTALS, THERE IS YOUR RECORD, SEVEN INCHES 10 INCHES IN DE SOTO. MARIAM CAMPUS -- MERRIAM WITH 9. 3. OLATHE EIGHT INCHES SO GIVE US TH E BULLSEYE WE REFERRED TO. TEMPERATURES ALREADY DOWN TO SKINNY NUMBERS. 1 IN TONGANOXIE. 8 SHAWNEE.

Billboard #1 in 1992 - George Michael, Elton John - Don't Let The Sun Go Down On Me was our #TBT song of the day (yesterday) and this is the OPEN THREAD for right now.

At some point we plan to update in the morning depending on whether or not TKC decides to shovel snow or local content. STAY TUNED!!!