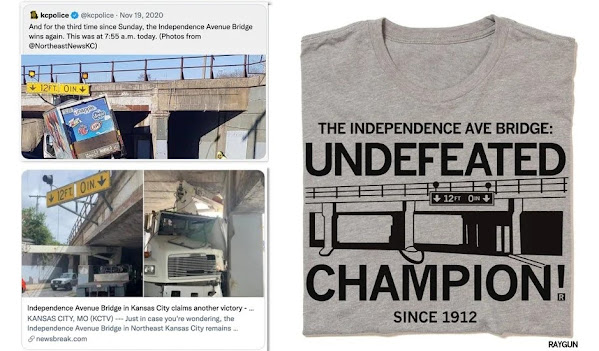 Every truck driver who has battled this bridge has lost.

Now, 12th & Oak steps up in a desperate attempt to ruin one of the best local running jokes . . .

The bridge lies at center of a metro-wide inside joke, but the city is now starting to take the situation seriously.

The question on possible solutions is still an open-ended discussion at this point, but the city is looking at everything. From low-cost solutions, including different signs, all the way up to major construction.

It just goes to show what a major issue the 12 feet of clearance has caused.

Construction equipment often acts as floss for the maw of the Bridge On Independence Ave, dislodging big rigs, with drivers negligent of height restrictions.

KANSAS CITY, Mo. - The infamous Independence Avenue Bridge in Kansas City, Missouri has been the site of constant crashes due to its low clearance, and could be on its way to a safety revamp. Does Kansas City Mayor Quinton Lucas and KCMO Public Works have the "Juice" to usurp the title of the bridge, warmly known as, "Undefeated"?