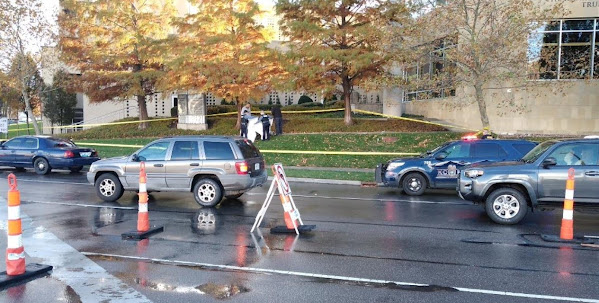 Special thanks to KICK-ASS TKC TIPSTERS for sending this Midtown slice of life amid rampant gunfire and police action across the metro.

KCPD: One victim in critical condition after shooting at 51st and Olive in KCMO

Hide Transcript Show Transcript JOHNNY: POLICE ARRIVED HERE AT 51ST ANDLL A LIVE -- OLIVE. TAKING A LOOK AT THE SHOOTING SCENE. POLICE OFFICERS ON THE SCENE, INVESTIGATG,IN TALKING QUITE A WHILE TO ASSESS WHAT HAPPENED. WE BELIEVE THE VICTIM WHO WAS SHOT HERE IN TRANSPORTED TO THE HOSPITAL MAY HAVE BEEN IN THIS VEHICLE.

KANSAS CITY, Mo. - A double shooting Thursday morning in Independence, Missouri, killed a man and wounded a woman. According to Officer Jack Taylor, public information officer with the Independence Police Department, officers found the victims at about 2 a.m. in a house in the 1500 block of North Pleasant Street.


Standoff in Independence comes to an end, suspect in custody

INDEPENDENCE, MO (KCTV) -- UPDATE: The suspect in this standoff has been taken into custody without incident. The police department notes that officers will still be in the area for a while as they conduct follow-up investigations. Previous coverage is below. The Independence Police Department is currently engaged in a standoff.

KANSAS CITY, Mo. - One Pair in south Kansas City is owned by Black youth, ages 14 years old and up. Jerren Thornhill, the founder of One Pair, said on Tuesday night their store was broken into and all the inventory was stolen.


Another new trial date set for man accused of killing 4 in fire, including infant nephew

PLATTE COUNTY, MO (KCTV) -- Another new trial date has been scheduled for a man accused of killing four people in a fatal fire. Grayden Denham is accused of killing his grandparents, his sister, and his infant nephew in a fire in 2016. His trial is set to begin on Tuesday, Dec.


Best of Kansas City 2021: Jaywalking is now legal in the city that named it

Photo by Maxwell Ridgeway In May, the Kansas City Council voted to remove its prohibition against jaywalking, as well as two nuisance bicycle offenses-a decision that was well overdue. Jaywalking got its name in Kansas City when The Star coined the term in 1905 to ridicule pedestrians who didn't stay to the right and yield to others on the sidewalks....

KANSAS CITY, Mo. - It has been over six years since someone killed Danielle Wilson and dumped her body in an alleyway off E 29th St. and Myrtle Avenue. Police have some clues in her case, but not enough to bring the killer to justice.