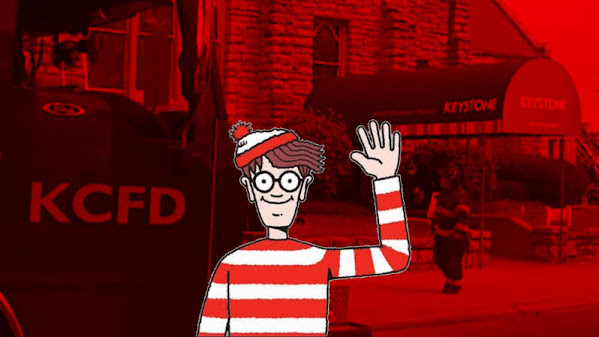 Social media credit where it's due . . . We've seen every angle of this blaze on Instagram via 30-something white woman who put down their pumpkin spice latte and put their Han Solo boots to good use today. Thank you.

Accordingly, here's somewhat better reporting on the inferno via MSM.

Kansas City firefighters battled a fire Monday at the Keystone United Methodist Church in the Waldo area.Crews were called about 11:15 a.m. to the church, which is located at 406 W. 74th St.Children and teachers at the church's school were safely evacuated.

KANSAS CITY, Mo. - Firefighters battled a three-alarm fire at the Keystone United Methodist Church in Waldo Monday morning, with between 75 and 100 firefighters responding to the flames. Firefighters said someone called 911 to report the fire around 11:15 a.m.

KANSAS CITY, Mo. - Just after 11a.m the Kansas City Fire Department responded to a call of a fire at the Keystone United Methodist Church in Waldo at 406 W. 74th Street. KCFD has ruled that the fire was accidental, and they believe it started on the roof where there was construction was going on.