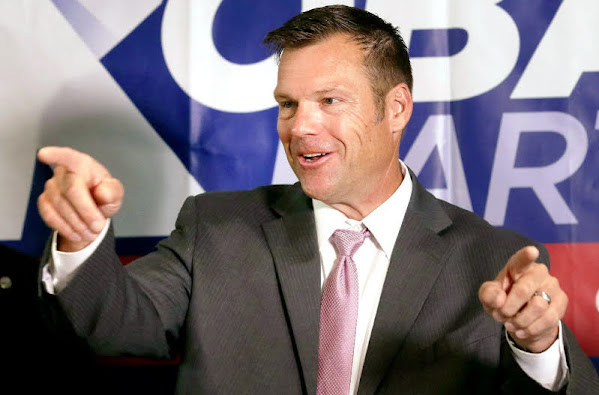 A legal debate in Kansas is actually getting quite interesting.

To wit and better than boring Kansas City mainstream news . . .

In what is a much better clap back than the State Senator's snark dutifully carried by the AP . . . Here's the money line from Kobach campaign spokesperson Casey Burns:

"If there is a less relevant legal background for the Attorney General's office than real estate law, I don't know what it is. Kansas doesn't need a homeowner association lawyer in the Attorney General's office, they need a fighter who will go to battle against the illegal and unconstitutional executive orders of the Biden Administration. Kris Kobach has the experience and qualifications to defend our Second Amendment rights and secure our elections with Voter ID at the polls."

Accordingly, the Kobach Camp is touting their endorsement of interest in both Missouri & Kansas . ..

“Kris Kobach was one of my most qualified, competent and dedicated attorneys at the Justice Department when I served as U.S. Attorney General,” Ashcroft said. “His experience and skill as an attorney are among the best in the nation."

"Kris Kobach won victory for the U.S. Justice Department in the Ninth Circuit Court of Appeals, and he has defeated the ACLU numerous times," said Ashcroft. "He is a man of integrity who does not run away from the fight.”

Ashcroft tasked Kobach with crafting a plan to prevent terrorists from exploiting gaps in the immigration system and in leading reforms to the nation’s immigration courts. He credits Kobach with bold initiatives that apprehended terrorists and kept Americans safe.