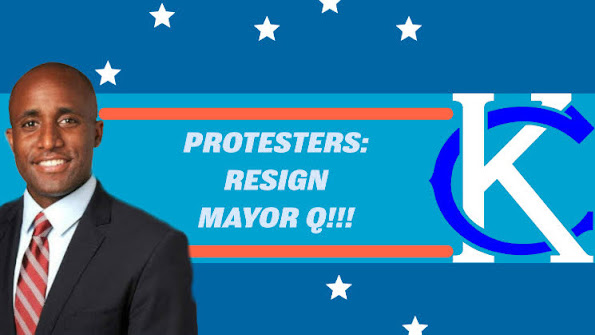 Conservatives from Inside The Beltway now attempt to sway local politics and generate just a bit of grassroots excitement ahead of midterm elections but jumping into the local "defund the police" debate.

A glimpse at tonight's festivities . . .

The Washington, D.C.-based organization will hold a rally 6 p.m. at the Hodge Park Amphitheater to show their support for KCPD and to push for a recall of Lucas. The group’s push comes from what the organization called recent "defunding efforts made by the city council."

Before readers get too excited, here's the deal . . .

Kansas City's recall process is actually pretty tough . . . It's not just a signature collection drive.  Petitioners need to sign a legal document claiming "malfeasance or misfeasance" against an elected official and then they must argue their case against in court, in front of a judge who is usually hesitant to screw with the status quo.

Here's the translation and something that activist Clay Chastain knows very well . . . Petitioners could go to a lot of trouble to raise community awareness, do a great deal of legwork and their efforts could still be thrown out.

This time around Mayor Q's detractors could easily achieve their signature quota and that alone would provide a black eye to the city hall honcho and PROVE that his support has faded.

This will be the 3rd recall attempt against Mayor Q so far.

KANSAS CITY, Mo. - While the fight for control over a portion of funding for the Kansas City, Missouri, Police Department , a crime prevention group sees an opportunity to implement crime reduction strategies through the ordinances passed by city council.


Experts: Lawsuit over KCPD budget likely to be resolved without trial

KANSAS CITY, MO (KCTV) -- What appeared on the surface to be a small win Tuesday for one side in the battle over the police budget could actually be something else entirely: A nudge from a judge to come to a compromise.

The city of KCMO was ordered today to continue at least temporarily to pay any expenditures incurred by the Kansas City Police Department authorized under its city approved fiscal year 2021-22 budget by Jackson County Circuit Judge Kevin Harrell.


D.C. pro-police group to hold rally in support of KCPD

KANSAS CITY, Mo. - A Washington-based pro-policing group plans to hold a rally Wednesday night in the Northland to show support for the Kansas City, Missouri, Police Department. The group, We Back Blue , is hosting the event starting at 6 p.m. Wednesday at the Hodge Park Amphitheater off of E.