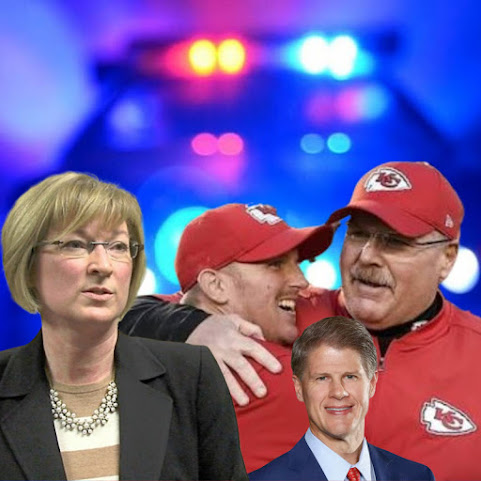 Like most things in real life, there's just no good outcome following a tragic car crash.

The youngster girl has suffered horrific injury that will severely limit her for the rest of her life.

Coach Reid lost a great deal of his "good guy" public persona for putting his son in a position where he was involved in a horrific human tragedy. Most of the public never knew his son had garnered such a high ranking job in the KC organization.

Even with an inevitable EPIC payout, the Chiefs don't come off great following this debacle.

Jackson County Prosecutor Mean Jean confronts a NO WIN situation: If she goes hard on the former coach, Chiefs fans will hate her and the harm toward the beloved organization continues. If she goes easy, the public will continue to lose confidence in her office.

More than any other, this case is a hand grenade that hurts everyone who gets near it.

KMBC: The prosecutor's office said Friday that it received the case in recent days from Kansas City police.

KCTV5: No charges have been filed and there's no official time table regarding the review.

KSHB: It remains unclear if or when any charges will be announced.

the young girl can never repaid.

The chiefs have to make it right with everyone else involved. So far they haven't' don anything.

As always, more stimmy is the answer.

When did the public have confidence in her office?

^^^ idiot. he'll get a wrist slap and diversion. You're not from KC you're from west Virginia you don't know shit. Idiot.

How is this a bad thing?

Why would she prosecute him? She doesn't do it to anyone else, why start now?

He will get hard time, and you all know it. Not the right politics. Sounds like the family was way ignorant. If you run outta gas, get way the hell off the road. And of course-- those kids needed to be in kid restraint seats.

Give him life without parole! He cost the Oreo Superbowl #2~

Andy may not be the best parent of all time but I fail to see how he could in any way be blamed (or the Chiefs for that matter) for this tragedy. Are employers responsible for what their employees do on their own time?

It will be hilarious when people find out that he wasn’t drunk and this was nothing more than a tragic accident.


Maybe if it was Patrick Mahomes kid something would have been done by now...right? This makes me sick and I will be the biggest mouth about it if this drunken idiot doesn't get charges slapped on him. So lets just wait and see if this no good prosecuting attorney does the right thing for once or if money and fame are more important.

6:24. comparing kc to west Virginia as if they are all that different...... both are hot pockets of trash. Get woke boyo.

Please recall that Baker failed to file charges against the rapist of young teen Daisy Coleman (Maryville MO). After being raped, an incapacitated Daisy was dumped in the snowy frozen front yard of her home, while the perpetrators circulated social media video/pics of their crimes.

Both Daisy and her mother would later commit suicide due to the unbearable stress and abandonment by Prosecutor Baker.

Fact: JP Baker doesn't have the guts to stand up for JUSTICE and the RULE OF LAW. She will NOT protect the innocent. She will PUNT on holding Britt Reid accountable, even though he confessed to drinking alcohol and taking drugs, and the crash scene report describes him as impaired. JP Baker will protect the wealthy White Male Chiefs management organization.

Already decided. Britt Reid get probation. He is moving to Florida. Under the table payment of 1 million bucks closed that deal! He walks free!