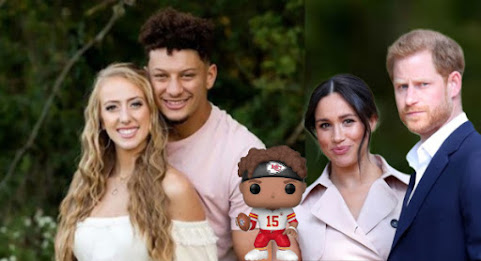 Just a quick bit of nice news for the afternoon proves that this cowtown might, in fact, conduct itself in a manner far more classy than British royalty.

Here's the word as The Queen attempted to do damage control today.

"Hear me out . . . Megan Markle talked about the Royal family not making Archie a prince and asking what color he would be right? Here in Cowtown KC we have ignored such trivial concerns. We don't yet even know if the young lady's hair will be frizzy like her dad. Kansas City loves the 'first couple' and their youngster without question. Babies are innocent no matter what, and even without seeing photos, it's obvious that everyone in Kansas City is happy for the young couple. In that way and a lot of others Kansas City rules over so-called royals."

But some of your scumbag comments prove the opposite is true. Weird.

Doesn't count. All those comments are just coming from one very sad dude who lives in a trailer out by Belton.

Near a pond with empty cans of Aldi pork & beans littering his front yard. Don't be so scared.


eh..we're used to successful black athletes hooking up with blonde hotties ..no biggie.

but..why the f*ck did Harry settle for some angry black chick.. he coulda had anybody..WTF?! .. no wonder the fam was pissed..

Ours are better looking too! I can't wait to see a pic of the baby!

Princess Mahomie has a nice ring to it!

So are you saying that the innocent babies are trash just because their bi-racial Bri? You may think my comparison silly but if either of their babies was my grandchild I would be delighted.

If Markhole thinks the Brits are racist, then why does her son have the same first name as the most visible American racist of the 1970s?


Patty Puss and girlfriend with baby aren't King and Queen. Far from it. The NFL was down 2.5 billion. Good for everyone who is boycotting. Keep up the good work. Patty puss has been lowered to selling cereal and that doesn't even sell well.

Megain Markle and wimpy are the laughing stock of the world. They have a lot of haters and have been caught in so many lies that people are posting them on line. They are no longer royals they walked away from that and wimpy betrayed his country. Megain has no baby. There is no proof of a baby ever being born by her in the UK. Oh and Megain is the racist one the RF welcomed her and she assaulted the help by throwing hot tea at one of them. All of her help quit because she is violent. Typical black woman. She's unstable and Harry is an angry fool.

is it okay if I don't like either one of them? That sounds fair to me.

Well, you, see, 6:18, there's this little thing us smart people have called an education, and there's another little thing known as logical fallacies, and what you just did was pull a classic "begging the question" fallacy on me. I must say it was done very poorly and could be easily seen through by anyone with half a fucking brain cell.

Probably because she wasn't alive in the 70's and wouldn't know wtf you are talking about lol.


yo "Bri" ..whoever the fuck you are.. go fuck yourself..for just once in your cowardly existence..try calling a man names to his face..instead of being yet ANOTHER douchebag keyboard warrior hiding behind his laptop..

Is that Megan’s baby between them?

I may be an old white granny and not as educated as you true. Still I want to see that baby no matter what it's skin color and am happy for all new parents!

Some of us thing both of those couples are dirtbags and could give a flying crap less about the SJW idol worship thing.

I think you all are reading too much into this. A lot of us just want to see that baby.

Looks like I struck a nerve with "Anonymous" who's calling me a coward behind a keyboard as he rage texts threats and tells me to meet him in public. It can't get any more ironic or stupid than this. Can it?

Then go look at pics online 7:11. Not interested in either baby or the SJW bullshit.

And yet you've posted on this thread twice so far, Baby Burt, so methinks thou doth protest too much. Weird.

At least the royal kid isn't a bastard child.

All babies look the same. If you’re excited to see a baby just because it’s a ‘celebrity’ baby, then you’re just lame. That’s all there is to it.

If you need to see bastard kid pics ask the KCMO Police to let you go through their mugshots.

It's not ruined because the kid is mix race. No big deal. It's ruined because he screwed a SJW woketard. Britnaynay is just in it for the money. Three years tops and she bails on Mahomie.

The queen has a milk dud grand baby ?! Priceless.

Mahome is one fugly Frankensteinian looking dude. Hell no I don’t want to see their baby.

Grannies like to see all babies. If that makes me lame or a podunk loser fine. It's nice to see a happy story on here for a change Bri.

They haven't put any pics showing the babies face online yet...thats kinda the point. Did you read the post or just couldn't wait to start with the negative comments Bandit?

And yet she's been with him since high school before he was famous. Weird

Show me the baby!

funny shiz. Even a nice post has some of the trolls pissed. That's a shame.

The best character assessment of Megan Markle is simply how she’s treated her father.

A better comparison might have been Travis Kelce and his black girlfriend.

Prince Harry is not even Prince Charles’ son and he knows that he was cuckolded. Henry is of the peerage but not a prince by blood. It shows a tremendous amount of ingratitude to be treated as Prince Charles’ son in every way but then to lash out like he did at the man who ignored his ignominious conception.

Honestly I would really not recommend that you go for hair straightening using any technique.I found this website when i was searching for some hair coloring ideas this website is so good and freaking awesome this website is very useful for person who love learning new things Hair highlights ideas.