TKC MUST READ!!! CELEBRATED FOOTBALL COACH WHO REFUSES TO PUNT OFFERS TO SAVE KU FOOTBALL FOR $90K PER WIN!!! 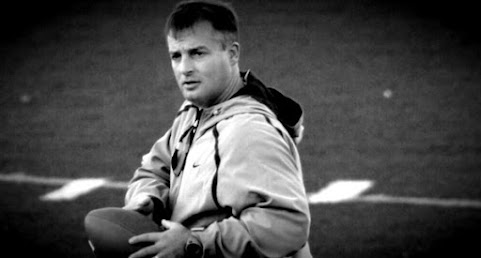 In the aftermath of #MeToo scandal that has decimated the already horrific KU football program, it seems that only the mysterious science of sports analytics can save the program from years of fruitless struggle.

A suggestion from a KICK-ASS reader and something to consider on this rainy afternoon . . .

"Kelley has become a cult figure among both football coaches and the sports analytics community for his disregard for traditional football wisdom. Although he may seem like a mad scientist, he bases everything he does on statistics.

Accordingly, here's the argument to put him in charge of KU football . . .

"At first glance, Kevin Kelley’s methods seem daft. His Pulaski Academy team doesn’t punt. It onside kicks after every score. It routinely runs trick plays. And all the Bruins do is pound the stuffing out of teams that usually have far more physically gifted players. Kelley won three state titles in his first 11 years because he’s a pretty good play-caller and motivator. But after he decided prior to the 2014 season to build his team completely around analytics, the Bruins have won six state titles in seven years."

"Kelley’s salary pitch had a purpose. He could have suggested $100,000 a win, but $90,000 sounds a lot cheaper and could resonate with someone at Kansas who might surmise that throwing seven-figure salaries at the problem isn’t working. So why not take far less financial risk on a coach who — at the very worst — will deliver the same miserable results his much more expensive predecessor did and — at best — will actually make Kansas competitive? Of course, the Jayhawks would have to pay more if Kelley actually did that. But then it would be worth every penny."

Moreover, the public should have a say in this decision given that college coaches and sports directors rank among some of the most HIGHLY COMPENSATED WORKERS PAID BY THE STATE.