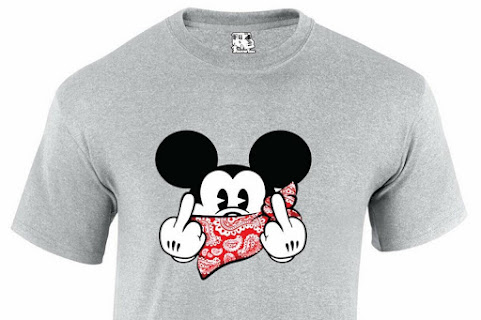 Checkit as we check online to see if we can snag one of these really fun gangster Mickey parody shirts . . .

KMBC: The Disney Store at Oak Park Mall to close by March 24

"After revealing last week that it plans to close at least 60 stores in North America, the Walt Disney Company has released the locations of its Disney stores slated to close by March 24. Included in the list is The Disney Store at Oak Park Mall in Overland Park."

Of course this is bad news for the mall and the inner-suburban economy.

PLEASE TELL BUTCH RIGBY THAT IF CURRENT DISNEY JUNK WON'T SELL IN KANSAS CITY, THERE'S NO WAY HIS MUSEUM PLAN WILL EVER WORK!!!

Whilst we admire his dedication, the "first mouse house" becomes increasingly less relevant every day as the culture is shifting and locals clearly don't care that much about the local history of this brand that doesn't need charity or municipal support to secure its international marketing legacy.

see you at the groundbreaking.

^^^ off course. Please wait at 31st and Troost at around 3 AM and hold your breath for a museum.

Disney is another left coast, holier-than-thou company that hates you, your kids and wants Maleficent/Camela Harris to rule America as would the Aztec Sun God.

When they fired Roseanne Barr for tweeting that "The Planet Of The Apes and The Muslim Brotherhood had a baby and it's Valerie Jarrett I LMAO.

No sense of humor.

What's red and has seven dents it it?
Snow White's cherry.

"Duck Tales" used to be a funny little kids cartoon, now Donald, that charming children’s character, has been kidnapped by a company following a rigorous ideological program of liberal indoctrination, whose latest conquest has been to introduce in the new episodes of DuckTales two gay ducks who have adopted a little duck, whose sexual habits have not been revealed thus far.

It's all woke, all day, everyday, every hour, every minute, every second and yeah your racist if you don't like it.

There is zero fuckin magic in Star Wars now, just pedantic demagoguery, interspersed with special effects and 110lb chicks kicking the fuck out of monsters and evil men who look like they eat nails for breakfast and kick the shit out of Seal Team Six before lunch.

Disney, like Progressives, ruin the fuck out of everything.

And who - WHO thought Hayden Christianson was a great actor? The guy is so fuckin wooden, they might as well have stayed in house and had Pinocchio in the lead role.

Goddamn he was bad.

The writers must have been cheap. Maybe they picked up some talent from "The View", or "The Bachelor". Absolute dreck.

I got no truck with Daisy Ridley. She KILLED it in "Ophelia" and I like her in other productions, but she is NOT kicking anyone's ass and was poorly cast in Star Wars. She trained with the Light Saver for about 15 seconds and then, is able to leap tall buildings ...etc. It was bad.

You don't have to be that great, they could have cast Rhonda Rousey, or, hey, Gina Carino. Oh, that's right, Gina has been canceled.

Good. No more overpriced sh*t made by the ChiComs, the biggest cheerleaders of Basement Biden in the world and creators of the deadly COVID.

Disney took a dump here, now they want a museum..

Kansas City's history is awesome for those who like to read. Would be nice to see more plaques about the history.

Is Butch, a heck of a nice guy, still with Marty?

Disney as a company is a sewer.

Waa! When people disagree it triggers me!! Waah! I wish people would just accept what corporations dish out uncritically! Whaaa!

Sorry, historical markers are known to cause black crime.

Butch has been suckering people for almost 25 years now with that scam Disney museum, he’s lived very comfortably off the donations he’s made pandering to suckers!

Walt Disney would be disgusted by the current company.