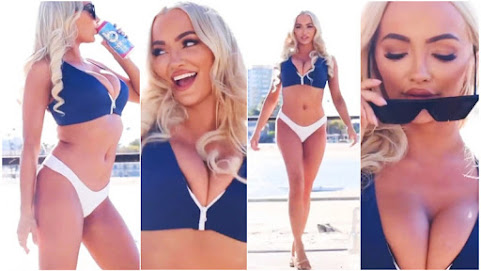 Right now hottie Lindsey and her many talents that include pushing "sports drinks" inspire our peek pop culture, community news and top headlines.

'I've never seen anything like it': Kansas City in middle of housing boom as homes sell fast

OLATHE, Kan. - Despite the pandemic, Kansas City is in the middle of a housing boom. Homes are on the market for just days before being sold, and they sometimes go for well over the listing price. Lindsay and Jared Gulbranson have been in their Olathe home for eight years.

Safety concerns after the removal of traffic signals at two nearby intersections are prompting Overland Park residents to push back. Stoplights at the intersection of West 91st and Glenwood streets were removed in October, but residents worry about the safety of pedestrians in the area now.

The Historic Kansas City Foundation may have won a temporarily halt to the demolition of a 117-year-old Kansas City church building near Hyde Park, but the battle is far from over. The preservationist organization made a plea to save the former Westminster Congregation Church, 3600 Walnut St., after a structural failure caused the historic building's roof to collapse Feb.

Many of Lindsey's 8.6 million-plus followers didn't waste any time showing their love and support for the steamy snap. The photo garnered more than 62,000 likes within the first 16 hours after it was published to her account. Her admirers also flocked to the comments section to leave over 870 remarks about the shot during that time.


Former Prez Against The World

Five independently elected investigators have turned their attention to former President Donald Trump, a sign his legal woes are mounting as he no longer enjoys the protections once afforded to him by the Oval Office.

CNN anchor Chris Cuomo addressed the sexual harassment allegations against his brother, New York Governor Andrew Cuomo, Monday night, saying that he "obviously" cannot report on the story. At the start of Monday's " Cuomo Prime Time" show, the journalist said that he will not be covering the story due to the conflict of interest.

MISSION, Kan. (AP) - With the U.S. vaccination drive picking up speed and a third formula on the way, states eager to reopen for business are easing coronavirus restrictions despite warnings from health experts that the outbreak is far from over and that moving too quickly could prolong the misery.

6 Dr. Seuss books to stop being published because of racist imagery

The sales of six Dr. Seuss books will cease over racist and insensitive imagery, according to the business that preserves and protects the author's legacy. The news comes Tuesday on National Read Across America Day, when schools across the U.S. celebrate reading on Dr. Seuss's March 2 birthday to commemorate the popular children's author, who died in 1991.

Miranda Lambert and Elle King Rocked Out to Cyndi Lauper While on 'Drunk' Set: Watch

"Girls just want to have fun! Glam Jam on the 'Drunk' music video set," Lambert captioned the video, tagging everyone who appeared. The "Bluebird" singer and King first teased their collab on Feb. 22, with both women sharing photos of the two together and the hashtag #DRUNK.


Two Tiny Kansas City Activists Hope To Save The Planet

Tristan, left, and Austin, right. // Photo by Lennon Photography It's only been open for just over a year, but KC Tiny Greenhouse has become a destination for plant lovers in the city. Austin Mosier and Tristan Carlson are life partners turned business partners and have a dream of making everyone they meet fellow crazy plant people.

Plenty of sunshine ahead for your Tuesday! Temperatures will start a bit chilly in the 20s but then quickly climb to near 60 this afternoon. The winds will be calm with temperatures above normal through Thursday. Chances for rainfall look very slim to none for the next 5-7 days.

Elle King, Miranda Lambert - Drunk (And I Don't Wanna Go Home) is the song of the day and this is the OPEN THREAD for right now. Keep going for more local links . . .

The Kansas City Board of Public Utilities (BPU) is warning customers to be aware of utility scammers ordering payment or else services will be terminated. Multiple reports have been made about calls stating if payment is not made services will be shut off within 30 minutes.

The Negro Leagues Baseball Museum is once again telling its story through apparel - but this time, it's a collaboration with Kansas City-based Charlie Hustle. The vintage-inspired apparel company, which has a licensing agreement with NLBM, created a collection that pays homage to the Kansas City Monarchs, a Negro Leagues baseball team.

Missouri Gov. Mike Parson announced Monday he will release the remaining $280.7 million he withheld from general revenue spending at the height of the coronavirus pandemic. "Thanks to our balanced approach to COVID-19, Missouri is in a much better position than what was originally projected," Parson said in a statement.

TOPEKA - Republican lawmakers in Kansas advanced a new proposal Friday to put $450 million in COVID-19 relief funds from the federal government into the state's unemployment program to help cover losses from fraudulent claims. GOP members of the House commerce committee included the measure in a bill aimed at overhauling the unemployment system and giving lawmakers more control over an upgrade of computers at the state's Department of Labor.

COLUMBIA, Mo. - Missourians wouldn't have to repay millions of dollars in federal unemployment benefit overpayments under legislation advanced in the GOP-led state House on Monday. At issue are mistakes by the state's Labor Department as it was struggling to quickly handle a huge influx of unemployment claims during the coronavirus pandemic.


J&J Vaxx On The Way

Missouri to get 50,000 doses of Johnson & Johnson vaccine this week

THE STUDIO. ROB: JOHNNY, THANKS SO MUCH. THIS MORNING THE FIRST SHIPMENTS , OF THE JOHNSON & JOHNSON CORONAVIRUS VACCINE ARE ON THEIR WAY TO STATES ACROSS THE COUNTRY. NEARLY 4 MILLION DOSES SHIPPED OUT LATE LAST NIGHT AND SHOULD BE AVAILABLE FOR INJECTIONS STARTING TOMORROW.

TOPEKA, Kan. - A bill to lower the legal age to carry concealed firearms in Kansas from 21 to 18 has stalled in a House committee, but a supporter plans to offer the proposal for consideration on the House floor. The bill would require permit holders to complete a background check and undergo gun safety training.

TOPEKA, Kan. (AP) - Kansas House members advanced a bill Monday that would allow college athletes to profit from their name, image, or likeness. The legislation is backed by both University of Kansas and Kansas State University athletic directors who say passing it will ensure Kansas universities won't be at a recruiting disadvantage with institutions in states that have similar laws, such as California and Florida.

Missouri voters could be asked to change the way state board of education members are selected. Representative Dottie Bailey, R-Eureka, wants to let voters decide who sits on the board, instead of letting the governor appoint all members. In order to be a board member, the Missouri Senate is also currently required to sign off [...]

If dancers can't be flexible, who can be? When the Kansas City Ballet announced that the spring in-person performances were cancelled, one could only hope they would pivot to something innovative and eye catching. What better mode than the company's annual choreographic showcase New Moves?

'We have a lot to prove': KC NWSL embracing 'blue collar' mentality in new season

PORT ST. LUCIE, Fla. - As KC NWSL training camp continues in Florida, the team is getting into its second block, focusing on tactical training. "We've had inter squad scrimmages over here that have gone well. The intensity is high. Players are very competitive. They know they're competing for spots.


The sad thing about the real estate today is, it's over inflated and people are paying too much for homes due to lack of inventory. The other bad thing is, today people never own anything they just look at payments they can afford when they get older they have nothing or are strapped by a payment later in life. That bubble is going to burst soon just like it did in 07 and 08. So if you over bid plan on your home value to go down. I will wait. I love it when people do this because I come along when the market crashes and pick up homes at your loss.


I think black people are racist for using white cloud toilet paper. You're wiping your black ass on white paper and that makes you a racist and it's also an assault on white people. I will sue you.

Fuckers need to go back to picking cotton.

12:25: You have some good points, but housing generally increases in value, and people who don't refinance eventually pay off their mortgages.

KC NWSL gals need to import some tranny players for peek performance on the field.

Her cunt has more botox than Nancy Pelosi

In Johnson County, if you dont have a hot tub, and finished basement, and 4 car garage and a 1 acre or larger lot on a secluded street - your home aint gonna get a high price. If your on, or near a bust street - big discount on your value.

Of course, she looks like a donkey ass but who names their kid Letittia ?