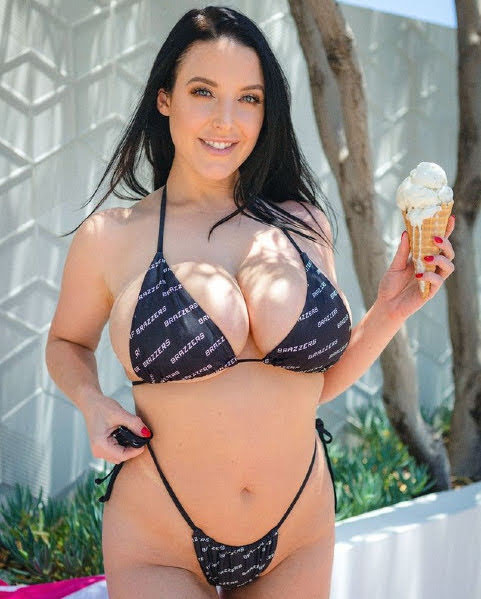 Right now pr0n star Angela and her promo for one of the top smut producers inspires our extended peek at pop culture, community news and top headlines.

Kansas City Eat Out Should Always Be First Option?!?

Should this summer prove sweltering, some Waldo residents might choose to shelter inside new dwellings built where one of Kansas City's designated cold storage facilities once stood. Botwin Commercial Development and Linden Street Partners anticipate a July opening for 222 Waldo Flats, an approximately $9 million mixed-use development with 44 apartments in place of the one-time Waldo Ice House at 222 W.

KANSAS CITY, Kan. - The University of Kansas Health System has an entire virtual clinic dedicated to people who are still feeling side effects from COVID-19, weeks after contracting the virus. The hospital is bringing specialists from several areas to serve as a team for each patient.

From festivals to fishing, Johnson County prepares for safe return of in-person events

LENEXA, Kan. - After a year without festivals, concerts and parades, some large events are making a comeback in Johnson County. Edgerton Frontier Days will return Friday, June 18, and Saturday, June 19. The two-day festival will feature art vendors, food trucks, live music and a beer garden.

In the wake of the Atlanta massage parlor shootings last week, in which eight people were murdered, there was much anguish and sober-minded discussion on social media placing the attack in the context of increasing rates of anti-Asian violence, the exploitation of Asian massage workers, and the historical fetishization of

After two months in office, Kamala Harris is still living out of suitcases -- and she's getting frustrated with it

It has been more than two months since Kamala Harris was sworn in as vice president of the United States, a historic moment for the country, as Harris is the first woman and the first woman of color to hold the second highest office in the land.

Signs of collapse across Brazil as Covid spirals out of control. Bolsonaro seems to have little response

You can hear the frustration in the nurse's voice as he narrates the video, walking closer to an open window.

Trump tries to defend Capitol rioters on Fox News, gets shut down by Laura Ingraham

In a Fox News on Wednesday, Donald Trump strongly defended his followers who breached the Capitol on Jan. 6, insisting that they posed "zero threat" to the lawmakers who had assembled that day to confirm the results of the Electoral College.

Kim Kardashian pleads with Kanye West to meet with her

The reality star, 40, who filed for a divorce from her estranged husband last month, was seen speaking to the camera about the split There were questions over how much of the break-up would appear on the eagerly-anticipated 20th and final season of the show The scenes came amid Kanye's

KANSAS CITY, Mo. - Bartle Hall motors into a brave new world this weekend. World of Wheels, the popular automotive showcase, comes to Kansas City's Convention Center for the first time since before the pandemic struck. That show, as well as many others, missed its Kansas City appearance in 2020.

Cloudy Saturday after morning rain in northern parts of metro

Lil Nas X - MONTERO is the song of the day and this is the OPEN THREAD for right now. Keep going for more local links . . .

KANSAS CITY, Mo. - There's been a big increase in trash along the city's highways and neighborhoods. Work crews are spending more time cleaning up litter and illegal dumping. Public Works Director Michael Shaw says the city had more than 200 workers out last week picking up several hundred tons of garbage that were illegally dumped throughout Kansas City.

Hide Transcript Show Transcript NATIONAL SPOTLIGHT A PERSONALITY OF A PIECE WILL BE DICTATED, OF COURSE MAINLY BY WE HAD AND TO A DEGREE BY THE HANDS FOR TWO YEARS KANSAS CITY ARTIST. TOM. CORBIN HAS BEEN SPENDING HIS DAYS BRINGING OUR 33RD PRESIDENT TO LIFE.

KANSAS CITY, Kan. - The Kansas City Monarchs Baseball Club will open the season May 18 with fans in the stands. The team said it worked with the American Association of Professional Baseball to implement necessary stadium protocols at Field of Legends. The season will open at 50 percent capacity.

KANSAS CITY, Mo. - When Don Pind hangs his target, loads his gun and pulls the trigger, he relies on years of experience and training. Pind is a lead firearms instructor at Claycomo Shooters, which opened Wednesday in Claycomo, Missouri.

KANSAS CITY, Mo. - ANCHOR KEVIN HOLMES: What is the goal of this Show-Me Strong Recovery Task Force? MISSOURI GOV. MIKE PARSON: I thought it was a really good time to reach out to the minority communities across the state to really see how they were affected in the small business arena, and how we can really help with that.

KANSAS CITY, Mo. - Democrats in the Missouri House of Representatives are warning Republicans that if the state doesn't expand Medicaid, they're leaving the state open for a lawsuit. In 2020, 54% of Missouri voters approved a ballot measure calling for that expansion in a constitutional amendment.


The Dotte Opens Up Vaxx

KANSAS CITY, Kan. - Wyandotte County residents age 16 and older will soon be able to walk-in for the COVID-19 vaccination at the Unified Government's vaccination facilities. Kansas Governor Laura Kelly said on Friday that Kansas was opening vaccine eligibility to every Kansan age 16 and up starting Monday, March 29.

Hide Transcript Show Transcript CONSIDERS ITSELF BLESSED COAL SIGN BREWERY IS GRATEFUL TO NOT ONLY SURVIVE THE PANDEMIC BUT TO KEEP GROWING KMBC9S. ROB HUGHES HAS ITS MESSAGE FROM NORTH KANSAS CITY. WELCOME TO CALL SIGN BREWING.

Unity Southeast gives away 7,000 pounds of food to people in need

KANSAS CITY, Mo. - Month by month and car by car, volunteers like Crystal Wilson dole out more than 7,000 pounds of healthy food to those in need outside the Unity Southeast Ministry in in Kansas City, Missouri. "It's a blessing," said Kimberly Abernathy, who stopped by for some food to take home on Friday afternoon.

KANSAS CITY, Mo. - When many business owners were closing amid the pandemic, Nika Cotton was opening the doors of her tea shop. Soulcentricitea offers dozens of red, black and green teas. While she touts the medicinal benefits of her beverages, Cotton also hopes to serve hope, healing and restoration to the community.