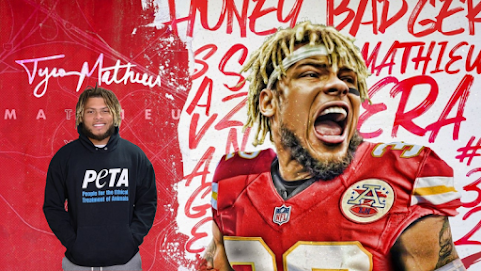 However, the note confirms that champion footballers are exceptionally progressive and actively utilize their platform to promote causes closer to their heart.

On the bright side, kindness to animals isn't such a horrible thing even if most of us didn't realize that calling somebody a "chicken" was a "speciesist" slur.

Kansas City, Mo. — If Tyrann Mathieu gets an interception during this year’s Super Bowl, PETA will get $100,000. That’s the offer made by an anonymous donor in honor of Mathieu’s longstanding support of PETA.

The money is earmarked for the group’s work informing people about the dangers of leaving dogs in hot vehicles in the summer and about “outdoor dogs,” chained out in the cold 24/7, for which Mathieu has starred in two viral videos: He baked inside a hot car, where dogs can succumb to heatstroke within minutes, and he shivered inside a walk-in freezer to illustrate how dogs suffer when they’re left outside during the frigid winter months. His practice of putting his own body on the line to help animals recently nabbed him a PETA Humanitarian Award at the group’s 40th anniversary celebration, presented by teammate Patrick Mahomes, who called him “not only an asset to our team but to animals who need protection.”

“PETA has found a selfless dog defender in Tyrann Mathieu,” says PETA Senior Vice President Lisa Lange. “We’ll be cheering him on this Sunday, knowing how pleased he’d be to win such a generous donation for the neglected animals he cares about.”

If he really wanted to bet big, they'd give the guy a decent haircut.


PETA? Are you serious? Does anyone in KC behind on their rent with kids to feed have a problem with this?

I think the donor is Michael Vick.

I'm impressed that he's chosen to focus on "chain dogs" and their plight in this town. Some people really treat their animals like shit around here. Good for him for his efforts.

I hope he gets his neck broken on the first play.

I will celebrate with fried chicken and mashed potatoes with delicious gravy.. steaks for everyone.!,,,