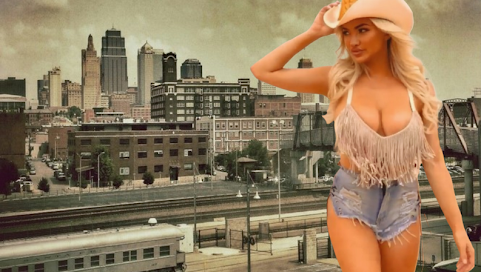 Right now energy drink promo from hottie Lindsey inspires our bouncy peek at pop culture, community news and top headlines and a myriad of other issues impacting this cowtown. Sorry it took awhile but we're sharing TWO DOZEN ITEMS OF LOCAL-ISH INTEREST IN THIS MEGAPOST. Click "read more" to, ya know, read more . . .

TAMPA, Fla. - Two Tampa nurses who were born and raised in Kansas City will be cheering on the Chiefs at the Super Bowl for free. They were two out of thousands of health care workers selected for free tickets by the NFL. "I screamed," Angel Cardello, Registered Nurse at Tampa General Hospital, said.


Back To Future: Kansas City Icon Converted Into Taco Stand

Crown Center is welcoming a new restaurant that will replace the iconic Crayola Cafe, which opened in 1999 and closed in January last year. Its initial menu was created by Michael Smith and Debbie Gold, who at the time were executive chefs at The American Restaurant.

Lindsey Pelas Claims IG Has It Out for Women, Censors 'Em Unlike Men

Play video content Exclusive TMZ.com Big tech is in the hot seat like never before -- and one company that deserves a chair in the front row is Instagram ... so says Lindsey Pelas , who accuses them of discriminating against women.

"Somebody who's suggested that perhaps no airplane hit the Pentagon on 9/11, that horrifying school shootings were pre-staged, and that the Clintons crashed JFK Jr.'s airplane is not living in reality," McConnell said in a statement first shared with The Hill.

President Joe Biden will sign three executive orders Tuesday that take aim at his predecessor's hardline immigration policies and try to rectify the consequences of those policies, including by establishing a task force designed to reunite families separated at the US-Mexico border, according to senior administration officials.

PUNXSUTAWNEY, Pa. (AP) - There will be six more weeks of winter, Punxsutawney Phil predicted as he emerged from his burrow on a snowy Tuesday morning to perform his Groundhog Day duties. Members of Phil's "inner circle" woke up the furry critter at 7:25 a.m.

Alexandria Ocasio-Cortez says she is a sexual assault survivor

Rep. Alexandria Ocasio-Cortez, D-N.Y., revealed on Monday night that she is a sexual assault survivor while recounting her experiences during last month's insurrection at the U.S. Capitol. "I'm a survivor of sexual assault," Ocasio-Cortez said, her voice quivering with emotion. "And I haven't told many people that in my life.

While January 2021 will go down in the ratings record books for CNN, the last week of the month may offer a portent of what the post-Trump era will be like for the network. In the first week of the...

In Super Bowl LV, Mahomes is trying to beat the player he admires most

There's no more compelling storyline in Super Bowl LV than the matchup between Tampa Bay Buccaneers quarterback Tom Brady - preparing to start his 10th Super Bowl - and young Kansas City Chiefs quarterback Patrick Mahomes, who will be starting his second as the reigning Super Bowl MVP.

Chiefs' Patrick Mahomes names his spirit animal and gives Travis Kelce one, too

More sunshine today & tomorrow with a nice warm up in store

Enjoy the warmth over the next 2 days The first cold blast arrives Thursday morning with a small chance for rain and snow in the morning and afternoon, little to no accumulation expected A stronger arctic front brings a blast of extremely cold air by Saturday morning & Super Bowl Sunday KANSAS CITY'S MOST ACCURATE FORECAST Tuesday: Morning clouds and fog leads to afternoon sun and much warmer temperatures.Wind: SE 5-10 mph.

Chris Lake & Armand Van Helden - The Answer is the song of the day and this is the OPEN THREAD for right now.

Pandemic Doubles Down On POC & Their Biz

KANSAS CITY, Mo. - A new nationwide poll from Small Business Minority shows minority-owned businesses continue to experience major financial losses during the COVID-19 pandemic. Those businesses battle each day to keep their doors open. The poll also showed almost 25% temporarily closed their doors and about 60% have not been able to bring back employees to pre-pandemic levels.


Cure Awaits Across The Bridge

KU basketball hoping 3-point defense can improve vs. Kansas State The new-age type of thinking, so to speak, says defense doesn't matter as much in that area. A KenPom study around eight years ago tackled that topic. It drew the conclusion that the offense is very much in control of its ability to hit from 3.

The success of NASA's future plans to explore and inhabit the moon may depend in part on research by university students, including a team of seven from Missouri University of Science and Technology who have won a grant from the space agency to develop a way to remove lunar dust from power-producing

Here's where to go now that Kansas' unemployment website is back

The Missouri Department of Health and Senior Services is looking for non-profit organizations throughout the state to help feed thousands of children who would otherwise go without meals during the summer months and during times of public emergencies when children do not have access to free or reduced-price meals at school.

Report: COVID-19 concern for Chiefs' Robinson, Kilgore due to barber

A report out Tuesday morning from NFL.com states two Kansas City Chiefs players landed on the team's COVID-19 reserve list after a positive test from a barber brought into Arrowhead.NFL.com reporter Tom Pelissero said receiver Demarcus Robinson and center Daniel Kilgore were placed on the COVID-19 reserve list after contact with a barber who tested positive for coronavirus.Pelissero said neither Robinson nor Kilgore have tested positive, and all parties were masked while they were in close proximity.

KANSAS CITY, MO (KCTV) -- First of all, I'm no football junkie, but when it comes to my line of work, it's all about data. Since we are officially one week away from the big game, I figured now would be a good time to do some number crunching.

Where do you go to get dressed if you're KC Wolf? In this case, that extra tall order falls to an Independence seamstress."I'm willing to try anything!" Rhonda Barber said.Barber began her business in 1981 and figured she'd stick to hemming. The universe had other plans.

I have a friend, Fallon, who has found an unusual ritual that seems to help, she spends the en tire game in a closet of her home, getting text updates from friends who are watching while she munches, sips, and cheers from her closet--it seems to help in close games!

Patrick Mahomes took center stage Monday at the NFL's Super Bowl Opening Night, and the Chiefs starting quarterback was asked about why he and his fiancée continue to invest in Kansas City.For Mahomes and his fiancée, Brittany Matthews, the reason why is simple."I think the thing for me, and Brittany, is that we want to invest in this community as much as they have invested in us," Mahomes said.

chuck said…
Check another box for AOC. OF COURSE she is a 'survivor' of sexual assault and, of course, although she hasn't said yet, it is a White Supremacist.

"We European-Americans are a stateless people. We have citizenship, but no country. No progress is possible until we face this.

We have no political representation. Any politician who said whites have legitimate racial interests would be crushed. Look at what happened to Steve King, whose decades of conservative service did nothing to save him after a New York Times reporter misquoted him to make him sound “racist.” He even voted to denounce himself and it did no good.

There is not a single white man in the Western world — no matter how powerful, well-connected, or wealthy — who would not lose his position if he openly defended white interests."
2/2/21, 10:05 AM

Anonymous said…
Who the hell would want to have sex with someone as nutz as aoc? Seriously, we all know crazy sex is freakin awesome but she’s too far gone, nobody wants to be in the same room with her she’s that crazy and besides, the lame stream media will back any lie she says and she knows she can get away with anything.

Anonymous said…
Reunite families by sending them back home where they belong.

Can't wait for AOC to release the police report from her traumatic sexual assault.

Anonymous said…
AOC obviously had her brains fucked out during that supposed assault. The lights are on but nobody is home.
2/2/21, 11:12 AM

Anonymous said…
I shit my pants twice a day !

Mahomes is a drunk who ruined the super bowl parade for everyone that is why not many people like him anymore. He's dirty as most black people are.
2/2/21, 12:07 PM

Anonymous said…
^^and you're an old, bitter, broken, busted loser, who posts on blogs all day long because everybody hates you. Mahomes wins. Again!
2/2/21, 12:17 PM

Anonymous said…
The Crayola Cafe gets replaced by a Taco Joint!
And people say the Kansas City haute cuisine scene is in trouble!
Tell us, will they be "chef-driven" tacos?
2/2/21, 1:24 PM

Anonymous said…
crayola crayons are for kids and so is a cafe theme, so the decision to re invent the crown center restaurant space, who can really criticize it?

chuck, the 'white people don't have a home' drum you bang bang bang lord have mercy this is an exhausting way to live

"AOC obviously had her brains fucked out during that supposed assault. The lights are on but nobody is home."
2/2/21, 1:40 PM

Anonymous said…
Shame that Phil saw his shadow, that means we'll have six more weeks of Winter,
whereas, if he hadn't seen it, Spring would arrive in only a Month and a Half.
2/2/21, 5:43 PM