Truth be told, I kinda thought the wig was a bit "problematic" as well but that was about a year and a half ago before Patrick Mahomes started shilling EVERYTHING from insurance to ketchup to ugly shoes.

This is probably giving clueless suburbanites a bit too much leeway but the youngster product models make it SEEM like the product is approved for white people . . . Even if it's not a costume any thoughtful person would wear. Jason "Big Sexy" Whitlock adorning himself with a version of the wig on national TV kinda proves/disproves any point about the cultural relevance of the hairpiece . . . Then again, by taking the costume to the national level, it's clear the wig isn't really verboten given that frizzy hair actually transcends racial boundaries if we want to get into the weeds of follicle-based demographic ethnography . . . WE DON'T. 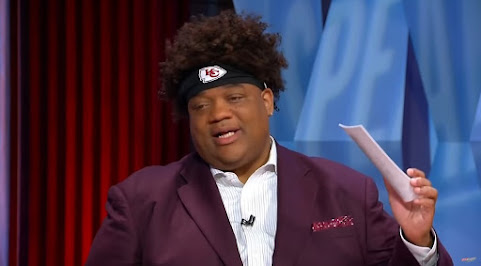 There's plenty of blame to go around here and maybe the superstar jock might have been just a bit more suspect about the merch sold under his label. This could be something else for him to think about whilst contemplating the greatness of Tom Brady that we all witnessed Sunday night.

Sadly, the scribe absolves Patrick Mahomes of any responsibility in helping to bring this product to market and instead focuses his ire on some rando in JoCo. It's unclear if calling out a golden ghetto white dude and making him the bad guy is really productive for local race relations.

Fact is, mutual understanding or "unity" is never the point of public shaming . . . This racially charged hair piece hit piece is nothing more than a cynical ploy for mainstream media to punch down on the local populace in service of their own "progressive" credentials . . . And then wonder why people have stopped subscribing to the newspaper.

Stunning journalism. Possibly not worth $900 a year.


Just goes to show you that Mahomes aka Queen Nefertiti turned elfin, is a hypocrite. It's all about the Benjamin's.... right?

Liberals/Progressives/Socialists/Communists have no sense of humor.

Lighten up. IF the Red Star actually covered the news, instead of shielding it's buddies and not reporting on them, they wouldn't need to fill space with this nonsense.


Maybe Mahomes should try some gorilla glue. That might take the racism out of it.

Exactly! Bad press is better than none at all. Murders rapes child abduction pandemic homelessness.. Hell... give everybody a free wig. It will keep heads warm.

what if a dragqueen wore blackface

culturally, the blackface is unfashionable. it ridicules black people and their appearance

culturally, the drag queen is fashionable. But it ridicules femininity and women's bodes and their appearance

and so it goes

The left is starting to run out things to be outraged at
The proof is that they must look to a child’s costume from a year ago to find something to be upset about
But have no fear, I’m sure the idea of space travel or some such western civilization breakthrough is next on the list

I hated the Hosmer mullet hair style too but that did not stop kids from copying it.

Perfect stupid look for an overpaid quarterback who just got his ass beat bad. Nothing makes you look for sure like the loser you are than an idiotic hairdo. Looks like a do you'd see in a Damon Wayans movie spoof or on Phil Spector.

Anything and everything a white person does is racist against black people. Nothing has been done to make up for it. Not enough CAN EVER be done.
What should the whíte majority do?

^^and his name is in your mouth because you're just old and lonely. He wins.

Mahomes is half white. Its only a problem if Asians do this.

White Guilt Daily definitely not talking about the local corruption and incompetence ruining the city.

Yet, liberals don't object to racist liberal Jimmy Kimmel still being on tv after he wore black face, used the n word, and said "It's so much fun to make fun of black people."

It's a unique hairstyle that even Mahomes makes light of in a TV commercial. I would guess he thinks its funny when people wear the stupid wigs. And lighten up about him losing the Super Bowl. He was chased around all day because a second string offensive line couldn't get the job done. We should enjoy the fact that we have someone who represents our team well.

TKC, thanks for posting this story....once again it proves that the kc rag has turned into nothing more than a liberal advocate paper, not the paper of record.

THis is just another way for libs, particularly blacks to keep their "dog whistle" going!

And if people don't wake up and start voting libs out of office and keep them out here is what you will have;

Mahomes, crusader for BLM, doesn’t seem too offended or humiliated on the product packaging picture. Maybe it’s because the only color he’s (wisely) thinking about is green.

Are they running out of things to bitch about? Is that why they think this editoriaganda is news?

^^no, because they now TKC CHUDS like you never run out of things to cry about as evidenced by this thread.

Chimpy is triggered easily especially where his puberty footballboi crush is concerned. After all he did get humiliated in the Super Bowl.

^^did he play in the Super Bowl grampy? Looks like you blood sugar is getting low. Eat some more cat food. That should help!

What happed to your widdle football man in the Stupid Bowl Chumpy?

The only thing that got beaten harder than the Chiefs on Sunday was Chimpy's meat.

Mahomes is the GOAT my ass!

More lib whining. Will they ever stop?

^why should they? You never do.

The Stalinist Red Star has spoken.

What a worthless piece of toilet paper.

^^that you can never shut up about. They win!

WAAAH! WAAA! My widdle football man is the GOAT. How many QBs do you know that can run that many yards backwards in one game! Even though he spent more time on his ass than his feet and only has ONE Super Bowl ring he's the best! Has anyone seen my binky?

I think it is raciest that Blacks, American Indians, Latinos and Asians have appropriated English as their language. Then have the audacity to mispronounce and add accents to it. Learn your ancestral languages ya raciest scum.

Soon, you'll need to have permission from a "woke" Demoncrap to go potty. Weird.