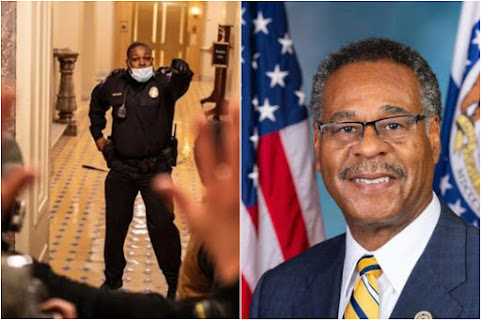 Kansas City connection to the aftermath of an American insurrection that continues to spark fear.

Congressman Emanuel Cleaver (D-MO) is part of a bipartisan group of legislators working to honor Eugene Goodman, the lone man who led an angry mob of pro-Trump rioters away from the Senate chambers during last week’s attack on the U.S. Capitol.

H.R. 305 would award a Congressional Gold Medal to Officer Goodman for his “quick-thinking actions that doubtlessly saved lives and brought security personnel precious time to secure and ultimately evacuate the Senate before the armed mob breached the chamber.”

Two Delaware men, one of whom was seen in a viral photograph holding a Confederate flag inside the U.S. Capitol during last week's riot, have been arrested on federal charges, according to the U.S. Attorney's Office for the District of Columbia.

Dozens of people on a terrorist watch list were in Washington, D.C., the day a mob attacked the Capitol, The Washington Post reported Thursday. The people were on the Terrorist Screening Database, a massive list kept by the government of people who have been flagged as potential security threats.

Pro-Trump protesters stormed the US Capitol building in DC on January 6. Image: Wikimedia Commons In brief A foreign account transferred half a million in Bitcoin to those who took part in the capitol riot last week, according to reports. Chainalysis believes the source of the funds was a French donor.

A Black Lives Matter activist who told Fox News last week that he'd followed a pro-Trump mob into the Capitol in order to "document" the siege is now the subject of a criminal complaint in connection with his alleged participation, according to the Justice Department.

A retired Air Force officer who was part of the mob that storrmed the U.S. Capitol last week carried plastic zip-tie handcuffs because he intended "to take hostages," a prosecutor said in a Texas court on Thursday. "He means to take hostages. He means to kidnap, restrain, perhaps try, perhaps execute members of the U.S.

As Facebook tried to shift blame over the Capitol riot to Parler or other smaller platforms popular with conservatives, several Democrats and a liberal watchdog group slammed the tech giant for doing too little, too late to crack down on pro-Trump, radical groups organizing violence in Washington.


MAGA In The Military?!?

The Pentagon's internal watchdog on Thursday announced an investigation into whether the military is doing enough to root out extremist and supremacist ideologies among active-duty personnel after last week's deadly mob attack on the U.S. Capitol.

The narrative from both sides is unbelievable in every sense of the word.

It was only a matter of time before they started admitting that blm and antifa infiltrated the rally in order to wreak havoc. That dude looks like he needs to dial down the crack or pcp he’s taking, he is one scary ass looking dude!

Apparently the dimwit propaganda machine couldn’t cover this up. Nancy peebrain will have someone’s head for this but don’t worry, chyna joe and both his hoes will get him out on bail and have all the charges dropped.

Violent left wing nut job on the loose, quick, somebody call the fbi!


What does Cleaver mean when he says MAGA riot? That riot was staged by the ANTIA democrats and they have proven that. It was the MAGA people who were trying to help the police officer that got shot.

Be an American and e-mail the Gov. about the accusations Cleaver has put out there and the division he is causing by his lies. Don't stop until something is done about this man.

There were many acts of heroism by the outnumbered and overwhelmed Capitol Police during the riot.
Why would Cleaver specifically pick out this one person?
What might they have in common?
The narrative never changes.
When you're a hammer, the whole world's a nail.
Sad.

Too bad he can't make the news for introducing a bill that benefits anyone in his district.

Now the stupid son of a bitch like cops? Hey Carwash, your hypocrisy is showing....again.

"Why would Cleaver specifically pick out this one person?"

Maybe because he singlehandedly antagonized foaming-at-the mouth mouth breathing MAGAT insurrectionists so much that they chased him rather than entering the house chamber nd led them into a trap.

But then, with your mighty keyboard in hand, I'm sure you would have put your personal safety on the line and done the same thing had you been in his position. Not.

So now definition of a "hero" is one who drops his nightstick and runs away up the stairs. 1984.

No "hero" cops trying to protect citizen's and their businesses in Minneapolis, Seattle, Portland, Kenosha, Louisville while being beaten with bricks, shot at, burned, spit on, urine bags thrown on them right Cleaver ?

This is why 20,000 Guardsmen are needed to protect the Marxist Democrat Congress and incoming President. They are corrupt and liars.

Biden is afraid of his own citizens. What a coward. We already knew Biden was a coward as he hid in his basement during the pandemic and allowed Obama to orchestrate riots all over the U.S. while Trump was dealing with a pandemic.

He wouldn’t have honored him if he were white, bet ya!

Based on most of the comments on this thread there must be good reception from planet tinfoil this morning.

Was the cop aman or awoman?

He led them away from the Senate Chambers & taunted them into following him until other Officers showed up to assist.

It reminded me of snarling & cursing angry white mobs attacking stoic black men for daring to march across their bridge.

As my father & I watched on television, I asked him, "What's wrong with those Southern People." His answer, "I don't know, Byron. The whole South East could fall into the ocean & no one would miss it."

The footage of this brace man's actions are a tableau of our times.

Oh blieron, he did nothing of the sort, the cleave is only giving him credit because he is black. Nothing more, nothing less.

Funny how the cleave picked out just one person out of hundreds who actually did their job to stop the incoming people.