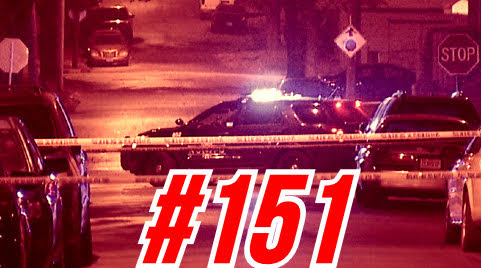 Overnight a double shooting near the 5200 block of Norledge leaves 1 dead.

This is the 3rd outbreak of KCMO gunfire in the past 24 hours and the 2nd murder within that same time frame.

KANSAS CITY KILLINGS ARE NOW TIED WITH LAST YEAR'S MURDER COUNT AND ONLY THREE HOMICIDES AWAY FROM BREAKING AN ALL-TIME RECORD!!!

KCTV5: 1 dead; man and woman shot in their KC home

The deadly gunfire was reported inside a home.

A man and woman were the victims, the lady will survive but the man died at hospital.

There were only 120 homicides at this time last year.

Damn, this town is a mess. I guess the latest anti-violence program didn't do any good. And all of that money for those anti-crime programs as went to waste. It's a shame we keep throwing good money after bad but the problem seems to be getting worse.

Don't worry, I'm sure the answer is more money from taxpayers.

I guess the solution isn't another town hall.


Quinton Lucas has promoted these killings same as Sly James did and same as BLM has. And they wonder why we don't like and won't have anything to do with black people. Who's the problem in our country? I think the answer is clear.

5:31 Absolutely!!! I know all of my friends and I constantly speak of the need to raise taxes and fund organizations that buy balloons and shout Progressive, BLM/AntiFa shibboleths from street corners while looting mine and others business'.

I mean, why change now? It has worked so well and is working so well in Baltimore, St. Louis, Oakland and any city where the voters (Thank GOD!!!) elect Democrats. Just yesterday I was watching a clip of Mazie Hirono explaining how hard it is for Democrats to connect with most people because of how smart they are compared to everyone else.

Mazie Hirono is a great example of the genius level IQ's that are so ubiquitous among our Democrat leaders today. Now, I in no way think she approaches the John Wolfgang von Goethe level of erudition which we can easily assign to our local politicians here in KC. But still, she is really, really, really smart and you can listen to that clip and she will tell you how smart she is..., so there ya go.

We should pat ourselves on the back, we voters, here in KC. Machiavelli said that, in the end, people get the government they deserve. Put a smile on your face, intrepid Kansas City voters and bask in the smell of cordite, enjoy the roller coaster type thrill ya get when you drive accidentally into an area now controlled like a "No-Go" zone in the City Of Fountains by BLM/AntiFa SJW soldiers and manage to get back home safe (Those close brushes with death sure make ya appreciate life.).

Yep, the Republic breathes it's last and Democracy is at hand - Mencken once said that "Democracy is the theory that the common people know what they want, and deserve to get it good and hard".

That's how I like to think we all feel about our local government and I hope you do too.

Meanwhile, in the major leagues, Baltimore has 262 murders and Chicago has 634. Our all time record is 153, which St Louis has by July 31. They now have 211.
Our hood rats are inept and unmotivated. They wouldn’t last a week on the streets of St Louis, Baltimore or Chicago.

I disagree - per capita our BLM-killers can hang with anyone.

Successful hood rats should be selling their skills on Webinars instead of selling drugs. KC's hood rats have much to learn.

6:54You’re stupid and uninformed and a pussy. Sorry.

150-200 murders are acceptable to Kansas City. The proof:
1. Silence from the fat, fake ghetto revs.
2. No action from Quinton Lucas.
3. Jean Petersucker Baker is still the prosecutor

As long as the overwhelming percentage of victims and suspects are hood rats, nothing will change.

Calm down everyone. The problem is that not everyone has yet heard the city's "STOP KILLING" slogan.

Because that's the real problem, not enough exposure to the new slogan.

Just like the real problem is that not enough people know killing is wrong, and need a slogan to tell them that.

Has nothing to do with the crappy family values, reliance on government handouts, two-face role models, etc.

The problem is a lack of educational and employment opportunities in the inner city for black people. Until this inequality is corrected, our crime totals will be high.

7:37 Before the pandemic, during the greatest economy in the history of the world, jobs were falling out of trees and they wouldn't work.

Ur full of it.

Ok, so probably won’t happen, especially in the chilly weather, but one of those occasional triple shootings could get us to the goal by midnight!

As a previous poster said; before the Pandemic unemployment was at its lowest level ever due to the Trump economy.

Some folks take the easy way out such as welfare, drug dealing etc instead of studying and getting good grades, getting a job and working one's way up the ladder.

Ever heard of Affirmative Action and the EEOC that gives blacks preferential hiring and promotion privileges over whites? Both programs have been around for 50 years.

No one is buying the victim hood saga anymore.

Maybe if neighbors took tuna casseroles to each other's home there would be less crime in the Hood.

Every time there is a homicide, take a tuna casserole; or if you are short on time, a dish of Tuna Helper to the victim's family. That's what we used to do when we lived in that neighborhood.

Used to be such a nice neighborhood; we would leave the windows open, doors unlocked and sleep on the front porch during the summer heat and not have an ounce of trouble.

7:24 is right. KC needs to paint STOP KILLING on the streets and sidewalks everywhere south of the river to remind people not to kill. Add STOP STEALING, STOP MAKING BABIES, and STOP DOING DRUGS, because those people need those reminders, as well. Now, up here in the Northland, we don't need reminding. We know to treat each other with respect and we have dignity. In fact, I am going to mow my neighbor's lawn, 1) because she is really hot, and 2) that's how we roll up here - we help each other out. So, keep your murdering south of the river, and for heaven's sake, read the street commandments: STOP KILLING (whites). STOP STEALING. STOP MAKING (so many) BABIES. STOP DOING DRUGS. The world will be a much better place.

7:01, where did you get those numbers? From the little voices in your head? The 2020 census is just finishing up and results have not been released. Until that happens no one knows what the 2020 populations of KC and StL are.

"Anonymous Anonymous said...
The problem is a lack of educational and employment opportunities in the inner city for black people. Until this inequality is corrected, our crime totals will be high.

NATIONALLY, SINCE LBJ, TRILLIONS, REPEAT, TRILLIONS (FROM MOSTLY WHITE TAXPAYERS) HAVE BEEN SPENT ON EDUCATION AND SOCIAL PROGRAMS OF EVERY CONCEIVABLE DESCRIPTION, TRYING TO CORRECT PAST INJUSTICES AND TO ASSIST TURNING THE BLACK POPULATION INTO PRODUCTIVE CITIZENS. TRILLIONS!!!!!! TO
NO AVAIL!!!!!!!! IT IS CLEAR THAT NO AMOUNT OF MONEY WILL SATISFY THE PROBLEM. IT'S A CULTURAL DEFECT. SANGER WAS CORRECT.

BLM will be over to paint a red X in the street and kneel with a couple of woke Johnson County Karen's this afternoon.

The sky is the limit.

7:37, surely you’re kidding? ANYONE, especially blacks, can make it on their own (legally) in this world if they’re willing to work. There are “now hiring” signs everywhere you look. And no, the majority are not high paying positions. But if you start flipping burgers, show up clean, sober and willing to work and learn, you CAN advance.