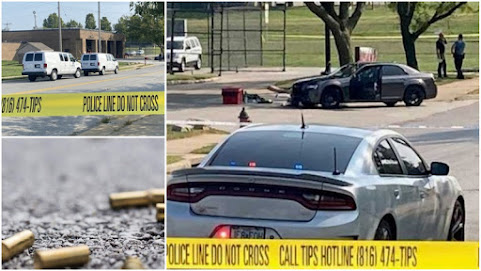 KSHB: 4 shot, including child, near Fire Station No. 18 in KCMO

"Police in Kansas City are investigating after four people, including a juvenile were injured in a shooting Monday afternoon near 32nd Street and Indiana Avenue.The shooting was reported before 3 p.m. Police said the victims were inside a car. They were taken to hospitals. Police said that three suffered critical injuries."

For every murder there are 5 or more shooting victims that live thanks to modern medicine.

If it were not for the trauma doctors at research and Truman we would have already doubled the murder high.

If the violence was the same 20 years ago these murder rates would be out of control.

And you get to pay for it

I Guess you are just going to let the Gangs and Drug Dealers shoot each other. Stay away from high crime areas. Don't get hit by unfriendly fire. Many more people are angry. Mental health problems. And on the left TRUMP DERANGEMENT SYNDROME. THEY HAVE so many people that are unhappy. Even on the Comments.section of tonyskansascity. They think the Orange Man will destroy the country .And appointe a new Judge .COME ON Lighten UP.

KC doctors are some of the best in the world with all the practice they get. I would want to be shot in kc. baltimore or St louis.

And it's the usual suspects once again. Q-Ball's social work thing is working out great! 🤣

And yet they want you to believe the police are the problem.

De Fund the Police in the inner city, let the parasites kill each other off.

Wow, that used to be a real nice neighborhood.

I agree, as long as they’re shooting each other. Thinning the herd is a good thing.

As long as none of the street "murals" were damaged, the revs can keep up the pressure to rename streets, and the tax money keeps flowing to the "anti-crime" nonprofits, this continued carnage isn't likely to get any more attention from KCMO city hall.
Let's keep those priorities straight!

And stupid assed Gail Beatty want to raise our property taxes with knowledge that this area is and always has been a war zone.

This city is every bit as bad as Chicago.

Did the victims have on orange vests ?

Mayor Lucas said if you wear an orange vest you won't get shot as you will stand out in the brush and tumbleweeds and won't be mistaken for a large opossum.

Most folks just call them possums without the "o" but proper grammar requires opossum.

^^ Mayor Lucas has a fancy Law Degree so he likes to use the proper pronunciation of opossum.

If Mayor Lucas was a tenured professor he would use the term "marsupial" but you have to have a PhD at UMKC to use fancy terminology like marsupial.


Mayor Lucas also said to wear one of those Minnesota hunting caps with fuzzy ball on top with your orange vest because the good Mayor said he likes looking at balls.

most of deez fools shooting lil 9's and .22 handguns. a few rounds dat miss major arteries & organs and you're good. even if major organs hit, dey hit you up at Truman, tell Andre sent ya. Staple & stich. You back on da street in a few hours w/ a refill on your pain med you can flip out da gate & start hustlin agin. white taxpayers bitches pay dem ozzy bills.

No need to guess who the shooter and victims are.

Mayor lickass promised to end the carnage and as usual, he's incapable of even trying to stop it so no wonder it’s the worst it’s evar been in killa shitty.

The child died. Pray to G-d and find Jesus for yourselves.

Their nazi tattoos gave them away

See what Republican state leadership gets you?


Take it to Quinton Lucas he praises criminals so they think they can do this and so far they have. He's doing nothing for the city NOTHING except making things worse. This is also what the NFL takes a knee for so they are just as guilty by inciting the violence through racism and suppression that doesn't exist.

Trump's America doesn't shoot each other. We be civilized.

Marxist Democrat Cities are not Trump's America. They be Communist Democrat Party and have 7,000 homicides a year.