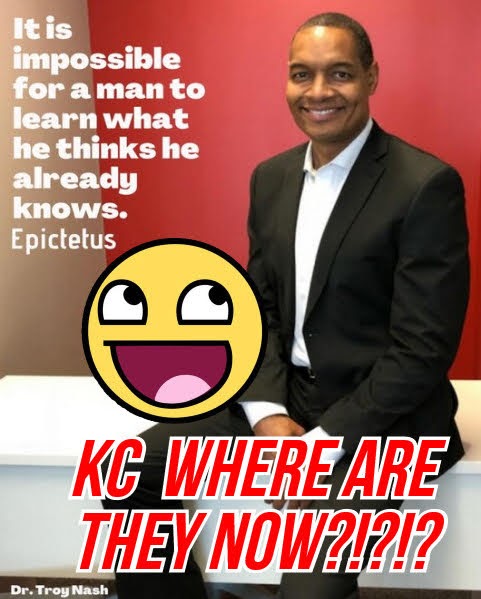 He was a councilman, a political rising star and on the path to being mayor of Kansas City.

Now he's a renaissance man and a surprisingly gifted memester given the graphic that was repuposed via fair use.

What has Dr. Troy Nash been up to lately??? According to the intro from his website: Dr. Nash "is an innovator, pioneer, and activist leader who blazed a path as a successful real estate entrepreneur and global humanitarian."

He's got at least one fan who reads TKC and admires the local influencer's skill.

For related content, check his motivational writing at the Insane Positivity Blog

Even better, here's a somewhat recent conversation with Missouri Life Magazine for those of us who haven't ventured into a dentist's office lately: Q&A with Dr. Troy Nash

And so, there is life after local politics and this power player seems to have found a great deal of inspiration outside of City Hall.

He isn’t inspiring at all. Another White Supremacist. Blacks are the biggest supporters, endorsers of White systemic racism. Who’s he cannibalizing today?

He brought new grocery stores to the area??? No he didn't.

The mere fact he thinks Cleaver is inspirational should tell you everything you need to know about the credibility of this article.

He’s also a wife beater, he was married to a white girl and he beat her pretty regular, their kid probably has ptsd from it. don’t you all remember that?

Nice to see his blogging of positive memes and comments. Thanks T.

Troy Boy is a wife beater?

Activist leader = "give me mah reparations"

7:22 Why do you think he dropped out of politics? What’s even more scary is he’s a dentist? He’s always been a womanizer so just imagine what he’s doing to these poor ladies when he puts them under, Jesus Christ this prick probably has thousands of pics of half naked ladies in his chair.

^^^ From a Burt Reynolds wannabe.

Burt didn't have to drug his dates.

Not what Loni said.

Loves his own image. Check any of his social media accounts. Bizarre pictures of him every day with a quote.